Greener IdealHelping you live sustainably
More
Home News Smart Design From Volkswagen: From EV To Hybrid And More In One... 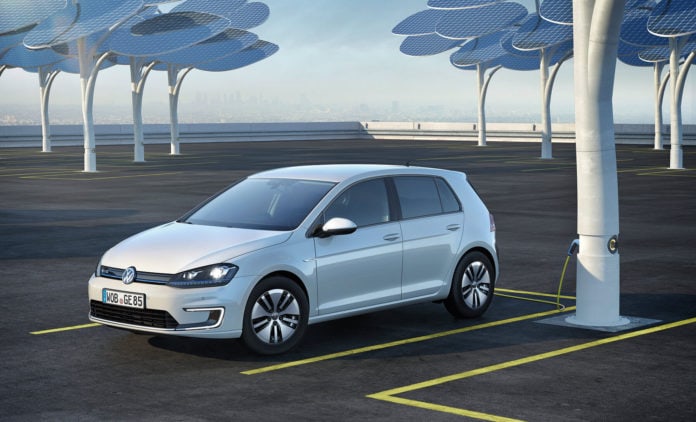 There are ‘smart’ people, and then there are ‘really smart’ people; particularly when it comes to today’s eco-driven auto manufacturers. Among this latter group, the folks at Volkswagen have to be placed right at the top of the list, since the guys at Wolfsburg are as adept at designing new rollers, as they are at figuring out how to secure the largest marketshare, while marginalizing any muss and fuss once a production line is operating. This characteristic is clearly obvious when it comes to the new E-Golf as the marque prepares itself for its U.S. market launch.

Although at first blush some may come to the conclusion that the E-Golf will be ‘just another’ product offering in today’s somewhat lazy U.S. electric car market, but once one gets under the skin of the little 5-door the ‘really smart’ stuff comes to the fore.

However, before we get into that, lets take a short course on the new E-Golf itself.

According to Volkswagen’s January 2014 press announcement the new E-Golf platform is slated to rollout in Q4 of this year offering front-drive, an all-electric powerplant, 5 doors and seating for up to 5 adults. The car will be pushed along by an EEM-85 synchronous permanent-magnet AC motor, producing 86 KW (115 HP) at 199 pound-feet of torque. And all of that zap will be translated to the ground by a VW-proprietary, highly-compact, single-speed EQ270 transmission and integrated differential.

Performance numbers for the E-Golf are expected to be typical for its class since the package will offer a 0-60 time of just above 10 seconds. However, for those who may prefer an even more sedate pace (and longer battery range), the system will also allow for two additional step-down power settings ranging from standard, down to eco, and then to the system’s lowest setting, eco+ In case of the last setting, however, power will be reduced to only 55 KW (74 HP), creating a top speed of only 55 MPH, and this will be further limited by disconnection of all climate control systems, thereby, offering little comfort if you happen to live in Phoenix during July.

That said, however, and with power, performance, amenities, and locale aside, under the E-Golf’s skin the platform’s configuration provides for much more than just an e-car version of Paul Simon’s one trick pony; and the people at Volkswagen already know it. According to Frost & Sullivan analyst Nicolas Meilhan, “Volkswagen isn’t going to sell many battery-only cars. The E-Golf is a stop-gap. [The E-Golf is] telling [the market] that VW is coming with electric cars, but the range-extended [plug-in hybrid] car will [also be released] in August 2014. [And] that won’t be a niche model like the battery electric car, but will be for the mass market.”

That said, however, not only is the new ‘E-Golf platform’ already tooled to accept follow-on plug-in hybrid components, it’s also ready to accept CNG, Diesel, and dare I say it, gasoline power as well; all based on the same set of internal fittings and structures. So, if you really fancy a hybrid when the only ‘new’ Volkswagen Golf available is the electric version, perhaps you should just hang on for a bit and get what you actually want. Either way, though, as I suggested earlier, the guys at Wolfsburg, ain’t ‘just smart’, but ‘really, really smart,’ just like an active den of clever foxes who work a problem until all the eggs disappear from the hen house.