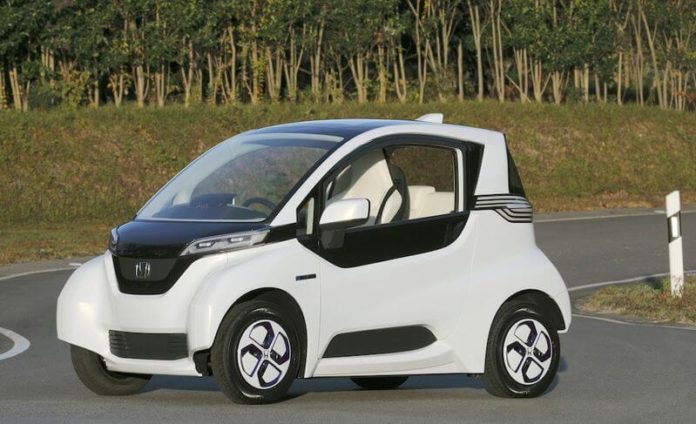 Honda envisioned the future of city cars with the Micro Commuter Prototype EV presented at the 2011 Tokyo Motor Show. This platform not only used all-electric power but could be adapted to a variety of models outside of the city vehicle niche. The Micro Commuter Prototype is closer to hitting the market with a recent announcement by Honda of a demonstration project in 2013. Test drivers throughout Japan will determine the practicality of this prototype as well as interaction with the Honda Smart Home System. Honda hopes that the Micro Commuter EV can eventually be the Swiss Army knife of electric vehicles for consumers around the world.

The body of the Micro Commuter Prototype is designed to hold one adult seat, two seats for children and small cargo. Honda is attempting to thread the needle on L7 standards set by the European Union for electric vehicles. This category requires qualifying vehicles to weigh under 400 kilograms and produce 15 kW or under using electric motors. The Japanese government is currently weighing similar regulations on new vehicles that could result in credits for future buyers. A lithium-ion battery pack and small electric motor just meet the output standard at 15 kW.

Development of the Micro Commuter focused on freeing up space in the cockpit for maximum passenger space. The battery, motor and other drive components were placed under the seats to free up leg room. Honda also developed a dock for a driver’s tablet computer to enable monitoring of vehicle performance. The driver can monitor vehicle speed, battery life, maps and weather conditions without messing around with a mobile phone. Future versions of the Micro Commuter EV will likely feature solar panels to recharge batteries as well as docked tablets.

Honda estimates that the Micro Commuter Prototype can hit a top speed of 50 miles per hour. A driver might take some time to hit maximum speed but this level of acceleration is fine for city drivers. A per-charge range of 37 miles covers the distance required for most motorists in Japanese, European and American cities. The Micro Commuter Prototype is also capable of a full battery charge in just under three hours. This charging time might not allow for quick refills but taxi companies, car-sharing schemes and fleets could recharge batteries between trips.

The public demonstration slated for 2013 will highlight Honda’s development of a Variable Design Platform. Honda isn’t merely hopeful that the Micro Commuter EV can appeal to young commuters in major urban areas. Police departments and other public services could use the Micro Commuter to handle regular routes. Senior citizens in major urban areas could use Micro Commuters to get around without waiting for buses and standing out in the elements. The Micro Commuter EV could also be used for car-sharing programs at university campuses and public parking lots. Honda also wants to show how this prototype can meet needs ranging from mundane errands to parcel deliveries. This diminutive vehicle might not seem up to the task but Honda’s design could open some eyes to city cars.