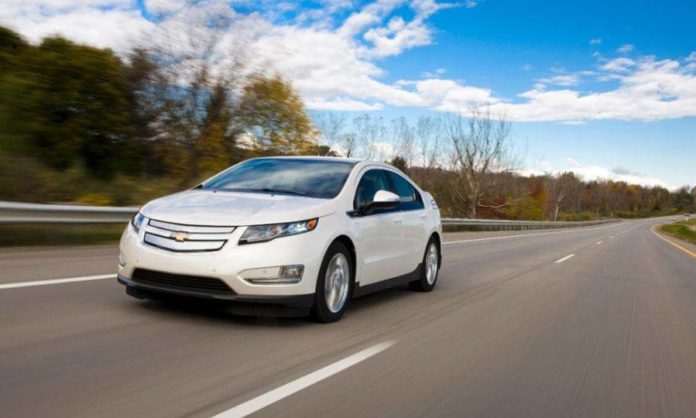 Now before you get all lock-jawed, this article ain’t about technology, or even the alleged advantages of electric versus ICE vehicles; it’s about Dollars and $ense. That’s right, I said it; Gilders, Marks, Euros, Pounds, Baht, Yen, Yuan, and U.S. old school greenbacks; you know the transaction medium that keeps economies running, water flowing, and food on the table, or in this case, cash enough to purchase a new car, and the potential lack thereof.

Now, 39 months ago, GM decided to try its hand at building an ‘electric car’ that the manufacturer sold and branded the Volt. It didn’t matter that shortly after the product rolled out, it became apparent that the vehicle was flawed for a host of reasons, but mainly because the Volt wasn’t all-electric at all, but instead was a plug-in hybrid, or more specifically, an ‘Extended Mileage Electric Vehicle (EMEV).  While some technical purists would insist that the car was more electric than ICE, the fact was that if a driver wanted more than about 40 miles worth of range, the Volt’s little 1.3 liter four-banger would come on-line to get the driver where he wanted to go.

Nonetheless, the advertising confusion created all kinds of credibility issues, particularly since the all-electric hubbub was driven by pervasive messaging fostered by the brand holder and a host of Federal proponents, further amplified by a seriously co-opted auto press including venerable outlets like Motor Trend. In the end of the day, however, the vehicle was ultimately shown to be what it was; a hybrid cloaked in electric sheepskin, that offered a modern equivalent of Odin’s all-powerful steed Sleipnar but, when in fact, it was more akin to the fragrant quality of methane produced by a herd of cows on a summer day.

Then, on top of the messaging problem, there was an issue with the price. Ah, it’s funny how stuff works, particularly if you follow the money far and long enough, since the marketplace will usually tell a manufacturer when to step off. In this case, at an original MSRP of $41k, the price was a bit rich for the average buyer even with a perky list of Federal subsidies, a cheap lease program, and the fact that the car lost money on every unit delivered.

Meanwhile,  however, “true” all-electric, or PHEV’s including the Mercedes-supported SmartForTwo, at between $14k – $15k, and Nissan’s Leaf at $25k – $35k were well below the Volts’ price point, got the same subsidies, and those manufacturer’s were “already” making money. Subsequently, Volt sales were slow, until Uncle Sam stepped in and mandated that all federal fleet vehicles be eco-friendly.

Suddenly, and by an amazing “coinky-dink”, the Volt became Government Motor’s poster-car for green transportation, to the degree that up to 15% of all units sold went to the Feds. This lead to GM’s ability to apply projected sales as booked units on its P/L, and allowed the company to claim that the Volt was the “best selling” PHEV in the U.S.. Sales numbers aside, however, as a practical matter the political move from Washington saved the Volt, and its parent brand from further vehicular ignominy, rather than having to deal with another crap storm just after coming out of its previous TARP troubles. Nonetheless, over the next two model years the car continued to languish in the midst of a generally somnambulant market, even though it continued to top the sales charts sustained by its Federal hog trough.

However, “someone” at GM has finally decided to make a downside price move on the Volt, and the effort appears to involve the initiation of actual market competition; win or lose, (one may suggest that the “someone” is new CEO Mary Barra, since she’s a highly-practical manager who certainly knows the difference between soft sales totals, versus actual retained earnings; but that’s just conjecture at the moment).

As a result, the news here regards a second-generation Volt based on an MSRP closer to $30k for 2016. But, then, the car’s competitors are undoubtedly going to reduce their own pricing in response, as multi-year economies of scale to evolve as the PHEV market further firms up. This is particularly true of Ford’s Eco-boost and Nissan’s Leaf products, and lets face it folks, those manufacturers are a lot further down the road to stand-alone financial stability when compared with the Volt’s somewhat dubious business situation.

So, it remains to be seen whether the 2016 effort will create new promise, or just herald a last blow from a trumpet that wasn’t managed and sold properly in the first place. Either way, though, the business runway will be short, and right at liftoff, the ride ought to be pretty bumpy.