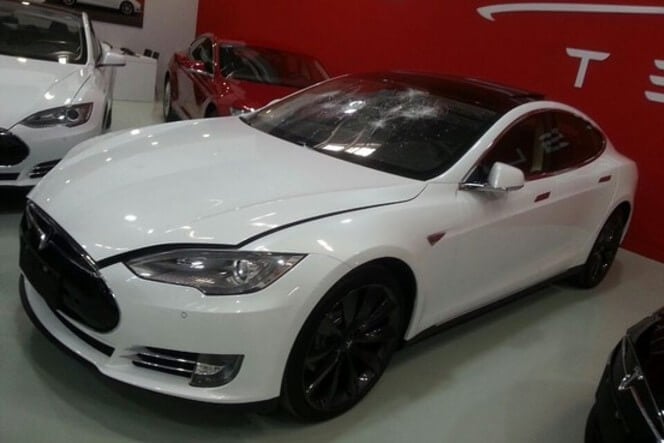 Oh My: Another Bit Of Trouble At The Center Of The Auto Universe

According to an article by the China Times last Friday, an unhappy Tesla depositor named Yu Xinquan appeared at the automaker’s maintenance center at Yizhuanga just outside the city of Beijing, and decided to take his personal frustration out on the only Model S display model in China by whacking the stuffing out of the car’s bodywork using a large machinist’s wrench.

The depositor was angry at the company’s continual inability to deliver his car, despite the fact that he had paid $40k in October 2013 (250,000 yuan) toward a final delivery price, while operating on a schedule that established an April 2014 delivery date.

Now, however, it appears that the first batch of cars will be delivered in the July time-frame and, unfortunately, the wrench-flinging Chinese executive is not among the first batch of cars. Apparently, Tesla has had a number of problems getting its vehicles through Chinese customs, with the result being that at least 31 customers are experiencing the wages of delivery limbo. Nevertheless, both the company’s local Chinese representative, and the San Carlos headquarters continue to assert that their cars will be delivered shortly.

On top of this most recent difficulty, the company has also had issues with an agreement to install customer charging units free of charge. In certain instances, Tesla specifically developed a local maintenance resource to do of the work for customers. However, others located in Shanghai and Beijing will have to do the work themselves. In the latter event, Tesla asserts that those customers actually opted out of its manufacturer program and, instead chose to handle the work themselves.

Back to Mr. Yu and his wrench for a moment, not only is he unhappy with his lack of delivery, as it happens he is also one of the customers who ‘thought’ that the charging unit installation would be free as well. Now, that is not apparently the case, and to add insult to injury, he says that Tesla has blacklisted his phone, thereby, eliminating his ability to regularly complain to the company.

Truth be told, you can just make this stuff up. But, after all, we are operating near the vortex of the ‘Center of the Auto Universe,’ where gravity is upside down, free is not free, and deposits are just black holes where customer currency disappears, never to be seen again.