A great new plug-in hybrid electric vehicle (PHEV) is coming to the USA later next year or early 2013, in the form of the Volvo V60. The Volvo V60 station wagon was available for test drives at the Michelin Challenge Bibendum in Berlin, and gave many the chance to see Volvo‘s new plug-in hybrid technology in action for the first time.

The V60 isn’t going into production in America until November 2012, so many of the details on the car are still unknown. But here is what is known so far:

With the release date still at least a year and a half away, details are likely to change, but this new luxury plug-in hybrid electric vehicle is sure to be a great addition to the eco friendly cars hitting the streets of the USA. Check out more photos of the Volvo V60 PHEV from the Challenge Bibendum below. 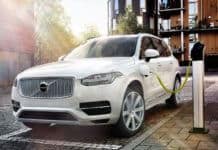 Volvo Commits to Sell One Million Electric Cars by 2025