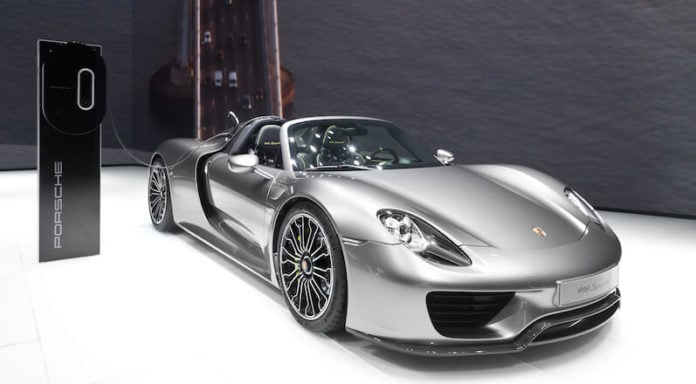 Following up on the positive reaction it received after revealing the concept for the car last year, Porsche is now taking orders for the Plug-In Hybrid 918 Spyder. The brand new hybrid car is certain to set a new standard for eco friendly cars.

Despite the car’s hybrid engine, it packs a ton of power under the hood. The 918 Spyder will have a 500+ horsepower V8 along with two electric motors that will add an additional 218 horsepower, and in total will only consume 3.0 L per 100 km driven. Although Porsche is already taking orders for the car, the first models won’t hit the road until the end of 2013, and as such, EPA fuel economy figures are not available for the vehicle yet.

The Porsche 918 Spyder stays true to its name

An additional cool factor of the 918 Spyder is the way that the numbers 9-1-8 play a role in all aspects of the car. No more than 918 of the vehicles will be made, and production will begin on September 18 (9/18), 2013. As you might also expect the cost of the vehicle would be $918,000, it’s not quite that high — but close enough. The car’s suggested retail price is $845,000 US, without considering destination and handling charges.

While the Porsche 918 Spyder isn’t a totally electric vehicle, its twin electric motors and minimal fuel consumption put it in a similar category. The eco friendly car will store its electrical energy in a lithium-ion battery that can be charged at any standard outlet, and the distance the car will be able to go using only its electric motors is more than 16 miles. Not bad for one of the fanciest sports cars on the road.

While this certainly isn’t going to be in the same league as the Chevrolet Volt or the Nissan Leaf, this eco friendly car may be a new competitor for the Tesla Roadster, for drivers with expensive tastes, but green consciences.

If you happen to be one of those drivers, be sure to order yours today at Porsche.com.