There are over 30,000 merchant ships plying the waters of the world, from the smallest at 1000 gross register tons to the very largest at over 170,000 tons. These ships carry most international trade, on the order of 5.88 billion tons per year.

The cost of fuel for these ships runs as high as 60% of their operating costs, and they burn thousands of litres in their massive engines. Even small savings in fuel efficiency would save the shipping companies significant amounts of money.

More importantly than that, though, is the decrease in emissions. Marine diesel oil, the most common fuel for ocean-going ships, contains 2.7% sulfur, which is more than 500 times what is allowed in the European Union for automotive use. In fact cargo shipping accounts for almost 75% of all sulfur dioxide emissions in Europe. The most commonly used fuel oil for ships, called Bunker C, is little more than sludge. It is barely a step above what is used to pave roads. In fact, Bunker C oil has to be heated so that it can even flow into an engine. It is dirty stuff, but very cheap, between ½ and 1/3 the price of conventional diesel fuel. It is so dirty, however that it really should not be used.

And by 2020, it won’t be, at least not as much. New rules will require shipping companies to either switch to cleaner fuels or utilize scrubbing technology, both of which will increase costs.

Harkening back to a bygone era, the answer seems to be in the wind.

The idea of adding sails to cargo ships, and even passenger ships, seems to be having a renaissance. The most promising of the current ideas floating about is the SkySail, which has already seen some commercial use.

The SkySail looks like a giant inflatable kite, and in operation it is tethered to the ship, and flies about 300-500 meters above it. At this altitude, winds are stronger and less variable than at sea level. In operation, the 5,000 square meter kite is controlled by the ship’s autopilot, and the course is varied daily based on the current weather forecast, in order to take best advantage of the winds.

In some locations, like the North Atlantic, using the sail can reduce fuel usage by up to 35%. However, in many areas of the Indian Ocean, the winds are so light that using the SkySail actually increases fuel use. In those regions where it can be used, though, it offers great savings for both the shipping companies, and the environment.

There are other sail technologies being explored, including rigid wing sails, that can offer even greater savings, though ships using those technologies are still in the future. Perhaps merchant fleets will someday follow Iceland’s example, as that nation moves to replace it’s fishing fleet with hydrogen fuel cell powered vessels, but it is a large stretch from an ocean-going trawler to a supertanker.

In today’s interconnected world, the ability to ship goods across the ocean expanses is something we take for granted. As we move towards an uncertain future, as we lessen our dependence on external resources, perhaps this will be an occasion to rethink not just how we ship things, but what we are shipping. How much of the 5.88 billion tons per year is truly useful and enhances quality of life, and how much is simply a burden on the environment? To create a more sustainable world, we need to start making some choices.

Related:
Polli-Boat made from trash sets sail around Taiwan to raise recycling awareness 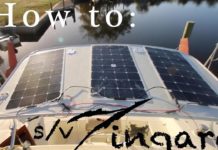 How To Install Solar Panels on A Sailboat 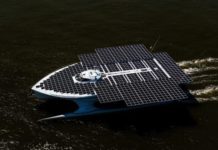