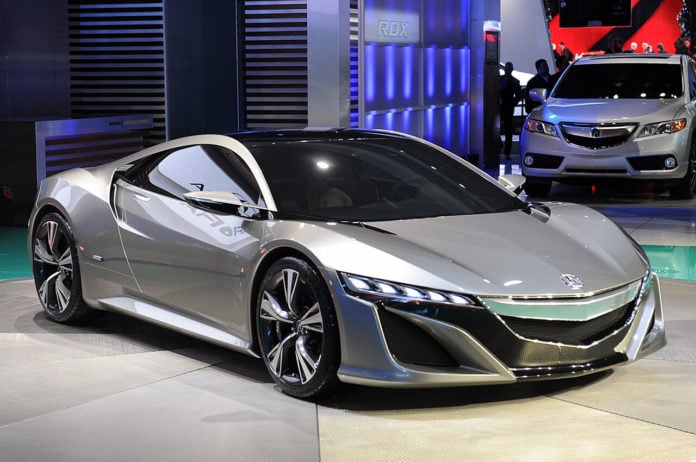 After years of delays, concepts and U-turns, Honda is adamant it really is replacing the original NSX – the chief executive even confirmed it would be launched within three years.

The new NSX has a big name to live up to – during the 80s, the original had an enormous impact on the supercar world, offering a stable and easy-to-handle car compared to the upper ranks of the sports car market. You could even argue that today’s Audi R8 and Ferrari 458 Italia wouldn’t be so road stable if the Honda NSX hadn’t been born.

The 2013 NSX focuses just as much on high-tech as the original – NSX then and still does stand for New Sports Experimental and Honda is equipping its new version with a hybrid powertrain.

In the next few years, the big boys at McLaren, Ferrari, Porsche and Lamborghini are all in the hunt for building the most competitive part-electrified (hybrid) sports cars. Of course, now you can add giant killers Honda to the list.

The new NSX will feature its mid-engined application of its Super Handling All-Wheel Drive system, meaning the NSX will be 4WD, although the accurate workings of the petrol/electric motors on the production car have yet to be finalised. Honda will use one of its petrol engines from elsewhere in its global range, which leads to either their 3.0 or 3.5-litre petrol engine with direct injection to provide the motive power.

Although the European hybrid road car range use nickel metal hydride batteries, Honda will likely use lithium-ion batteries, as they bought into a Japanese specialist in lithium ion technology.

The hybrid setup consists of mid-mounted V6, sending power to the rear wheels and is augmented by an electric motor. The SH-AWD integrates one electric motor with a dual-clutch transmission. Two more motors can send negative or positive torque to the front wheels during cornering for improved handling. Honda claims the new AWD system will offer super car acceleration whilst providing improved efficiency. Honda haven’t as yet disclosed how much horsepower its engine and three electric motors will produce, but I’m guessing it’ll be 450+.

When can we drive this Eco Beast?

So when will the all-new NSX be hitting the streets? Well, this is no longer a pie-in-the-sky concept, and Honda has confirmed the NSX is now a live project – they will want to regain their reputation for cutting-edge engineering after the demise (in Europe) of the S2000, and Type R models. Car sales for this Honda have been predicted to hit an all-time high when this super electric model hits the streets in an estimated late 2013.