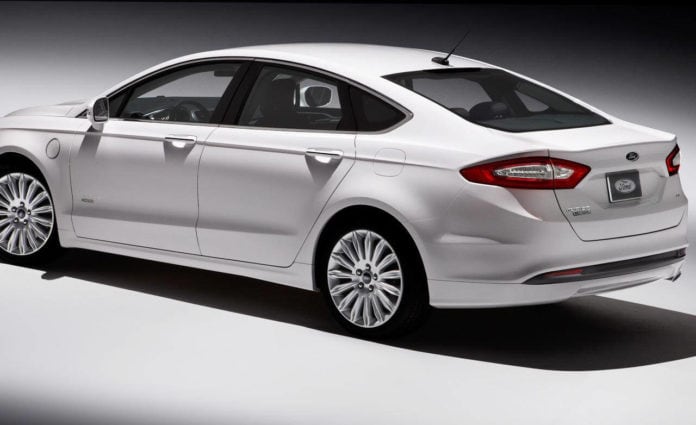 Earlier this month the Green Car Journal announced five nominees for their Green Car of the Year award.  Today, at the Los Angeles Auto Show, they declared the 2013 Ford Fusion the winner.  Beating out the Dodge Dart Aero, the Mazda CX-5 SkyActiv, Toyota’s Prius c, and the Ford C-MAX—the 2013 Fusion sedan is in its eighth year as a part of Ford’s lineup.  For the 2013 model year, the American automaker presented buyers with the choice of three different powertrains in the Fusion.  In addition to a traditional internal combustion engine, this is the fourth year Ford equipped the Fusion with a hybrid powertrain, and the first year they’ve offered a plug-in hybrid powertrain in the sedan.  According to a New York Daily News report, the editor of the Green Car Journal—Ron Cogan—said that it was these wide array of engine options that earned the Fusion the coveted distinction of Green Car of the Year.

The report went on to note that its traditional gas-powered engine achieves about 34 highway miles per gallon, and that its hybrid engine can propel the midsize sedan up to 47 miles on a single tank of gas.  The plug-in hybrid Fusion Energi is expected to get approximately 100MPGe and have an all-electric range of about 20 miles—which Ford argues, makes it the most fuel efficient midsize sedan in the world.  The Fusion Energi is not cheap however, as the plug-in hybrid starts at an MSRP of $38,700. In comparison, the 2013 Fusion has a starting MSRP of $21,700, and the hybrid Fusion starts in the middle at $27,200.

The Green Car of the Year Award, which is given to the production vehicle that’s made the most environmentally friendly advancements in the last year, was most recently won by the Honda Civic GX Natural Gas and the Chevy Volt Plug-In.  Every year, a panel of 11 judges chooses the winner—most of whom are automotive or environmental experts.  Occasionally the Journal invites a celebrity judge like Mario Andretti to participate as well.  This year’s panel included talk show host and car enthusiast, Jay Leno, Sierra Club Executive Director Michael Brune, Jean-Michael Costeau of the Ocean Futures Society, and Global Green USA President Matt Peterson among others.