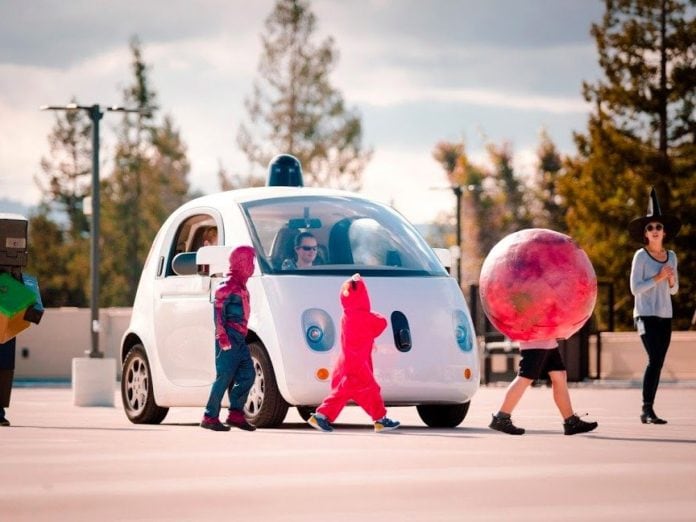 As Google continues testing its driverless car prototypes around California, it now seems to be focusing on improving its vehicles’ ability to interact with pedestrians, so that they can help ensure the safety of what is regarded as one of the most vulnerable categories of road users. Specifically, the tech giant is trying to teach its vehicles to differentiate between adults and kids, in order to be able to practice extra caution when they are around the youngest road users, who are at a particular risk.

During Halloween Weekend, kids wearing costumes were moving around Google’s self-driving cars that were parked at various locations around the company’s premises. The goal was for the cars to learn more about how kids behave on the streets, by watching them through their sensors.

“This gives our sensors and software extra practice at recognizing children in all their unique shapes and sizes, even when they’re in odd costumes,” said Google in the blog post.

Google’s cars were monitoring kids up to three feet tall, so that their software can be improved and adjusted to allow the cars to react appropriately when they detect children near them.

Related:
What To Do About Air Conditioning This Summer

“We teach our cars to drive more cautiously around children. When our sensors detect children—costumed or not—in the vicinity, our software understands that they may behave differently. Children’s movements can be more unpredictable—suddenly darting across the road or running down a sidewalk—and they’re easily obscured behind parked cars,” added Google.

Trying to learn children’s behavior on the street is an important step for improving autonomous driving technology and ensuring its not a threat to public safety. Kids’ movements are pretty unpredictable and they tend to cross streets without looking and jumping into the road, and often end up being hit by cars that don’t have the time to react and avoid them. That’s why Google has decided to try and make its cars capable of differentiating between children and adults, so that they can be more cautious and slow down or stop whenever they detect a child near them.

If the company manages to teach its cars to predict children’s behavior and react accordingly in a timely manner so that they avoid hitting them, it would mean that it has yet another major competitive advantage over other companies developing autonomous vehicles. Proving that Google’s cars can behave in a safe and responsible manner around pedestrians, especially children, would mean that they are safe enough and would convince consumers that they are not a threat to their children’s safety.

Google started testing its self-driving prototypes on public streets a couple of months ago, and they have been involved in a series of incidents in the meantime. But, the company has said that none of the incidents were caused by its cars, assuring the public that its technology is very reliable.