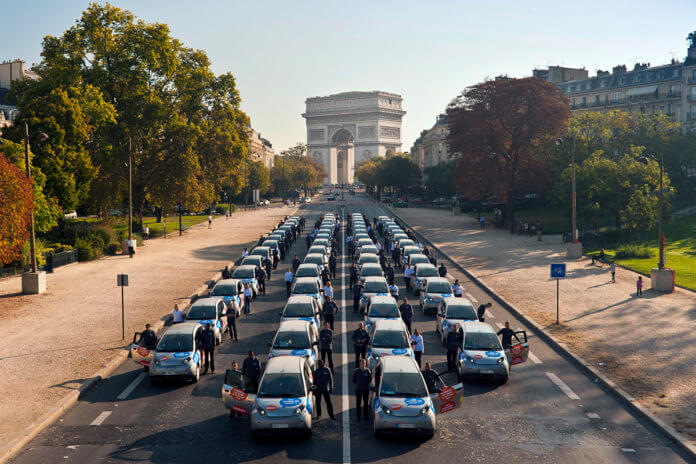 The city of Paris launched an electric car sharing program called Autolib’ exactly one year ago. On its one year anniversary, the program has been confirmed as a success, as the program started with only 66 cars and now boasts 1,800 at 670 kiosks. The concept is based on Paris’s successful Velolib bicycle-sharing program.

It has been estimated that 37,000 are part of the system and an additional 1,200 join each week. While most of the clients are men, there have been more women who are taking part in the Autolib’ system. Majority of the drivers are between the ages of 25 and 39. Seventy percent of the users do not own their own cars.

The Bluecars have been rented more than 500,000 times in 10 months, covering more than 3 million miles (5 million km) in total.

Today, they are rented 4,000 to 5,000 times a week, with highest usage on the weekends. You can’t spend 15 minutes in central Paris without seeing one pass by on the street.

When all 3,000 cars are on the streets, they are expected to travel 40 million zero-emission miles (60 million km) a year, collectively reducing emissions by the equivalent of 22,500 cars in Paris.

The cars are Bollore Bluecars: a 660-pound silver-coloured silver three-door hatchback with four seats with 30-kilowatt-hour lithium-ion battery, under the passenger seats, powers an electric motor that drives the front wheels and basic interiors.

The concept is simple: Kiosks are placed along Parisian streets and consumers can register and pay for renting an electric car. The cars do not have to be returned to the same kiosk so you can drive it from one kiosk to another. What’s more, there are reserved parking spots around the city for the electric cars.

The report, published in the Journal of Industrial Ecology, asserts that not only do electric car factories also emitted more toxic waste than conventional car factories, but greenhouse gas emissions are significantly higher if coal is the source of electricity. Additionally, the production of batteries and electric motors requires a great deal of toxic minerals such as nickel, copper and aluminum. All of these factors make electric vehicles about twice as harmful as internal combustion vehicles and increase the “potential for significant increases in human toxicity, freshwater eco-toxicity, freshwater eutrophication, and metal depletion impacts.”