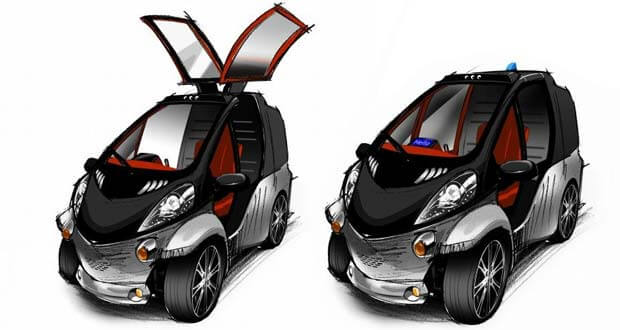 CEATAC Japan 2012 in Chiba City, Japan opens today with an abundance of gadgets and gizmos for the tech savvy. Toyota is using this event to highlight the company’s advancements in vehicle connectivity and all-electric propulsion.

Visitors to CEATAC Japan 2012 can head to Toyota’s exhibition space for a glimpse of the Smart Information Network Social Electric City Transporter (INSECT) EV. This diminutive EV not only eliminates emissions but allows the driver to customize the commuting experience using cloud computing.

Toyota knows the CEATAC audience and hopes that attendees will see the Smart INSECT as the future of driving rather than a silly gimmick.

The Toyota Smart INSECT concept was produced by subsidiary firm Toyota Auto Body specifically for CEATAC. This single-seat vehicle might look like neighborhood electric vehicles (NEVs) developed over the past decade but Toyota intends the Smart INSECT for daily commutes.

The flip-up doors used on this EV concept add a touch of style uncommon in compact cars. Toyota’s mixture of silver, black and red for the concept appeals to viewers who are interested in traditional styling.

An important component of the Toyota Smart INSECT is a network of motion sensors stationed on the doors and front bumper. These sensors scan anyone approaching the vehicle and use facial recognition software to identify the driver. The doors are unlocked when the driver is identified within a short distance of the car.

Toyota will also demonstrate how motion sensors allow a driver to open doors without touching a door handle. Motion sensors also detect the movement of a driver’s hand to automatically open or close the doors. A few technical issues might seem apparent including sensor obstructions and inevitable glitches but future development would resolve these problems.

Smart INSECT owners also gain access to the Toyota Smart Center for driving information, preferences and virtual assistance. The Toyota Smart Center is a cloud network that would collect data on driver behavior and vehicle performance from future models. The Smart INSECT EV uses digital audio and exterior lights to greet the driver or communicate low battery charge upon entering the vehicle.

Toyota might not produce the Smart INSECT anytime soon but this concept seems perfectly position between traditional and self-driving vehicles. Experiments by Google with vehicles keeping of operating autonomously have raised concerns about overreliance on wireless technology. These critics believe that autonomous driving is problematic because of technological limitations as well as potential hacking.

The Smart INSECT goes further than existing vehicles to use cloud computing for driving data but stops short of removing responsibilities from the driver. Toyota has developed innovative methods of ensuring vehicle security based on driver identification.

CEATAC Japan 2012 is only a first step for Toyota as the company translates these ideas into production models.