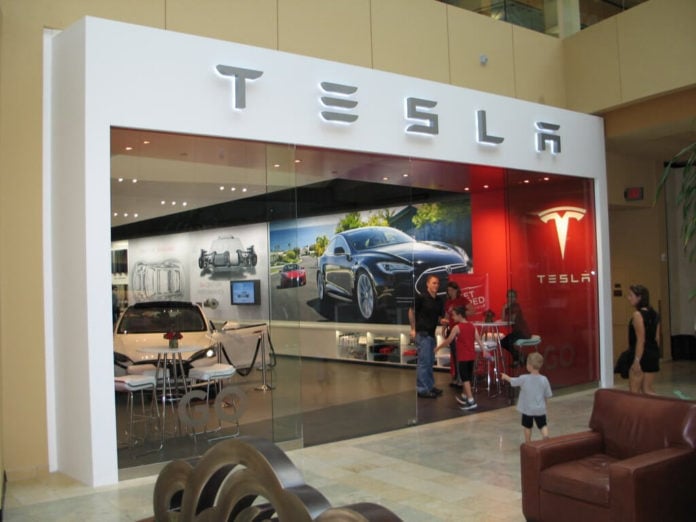 So we all know that driving electric is probably better for the environment. We’re all aware that EVs are suddenly flooding the auto market. And that carmakers are furiously vying for hybrid supremacy. But what if you could tangibly experience the benefits of driving electric with interactive displays and flashy visuals?

That’s the environment Tesla Motors is trying to create, so that everyday consumers can experience the beauties of EV technology — rather than just take the industry’s word for it.

The motor company says its unique retail concept demonstrates the benefits of driving electric by allowing customers to design their own ‘Tesla Model S’ on a large touchscreen and then view it on an 85-inch video wall.

“All retail locations have Tesla’s Model S premium sedan on display, and many have dedicated test-drive vehicles where we will offer customers the opportunity to experience the exhilarating performance and superior handling of Model S,” said George Blankenship, vice president of worldwide sales and ownership experience. “As we open locations throughout the country, our approach continues to be geared towards engaging and informing more people about Tesla and Model S and the technology behind it. Customers can walk into a no-pressure environment, ask questions and engage with informative product specialists to learn more about the many advantages of going electric. We know we’ve done our job when customers leave smiling.”

Next week, Tesla plans to open its second location in the Boston area at Natick Mall. This will be followed by the opening of a store in the Chicago area at Westfield Old Orchard.

Additional locations are planned in October and November in various cities across the United States.

Tesla’s overall goal is to accelerate the world’s transition to electric mobility. The company is based in Palo Alto, California. It designs and manufactures EVs and EV power train components for major automakers like Toyota and Daimler.

Tesla says the new ‘Model S’ is the first sedan to be built from the ground up as an electric vehicle. The company began deliveries of this model this past June.