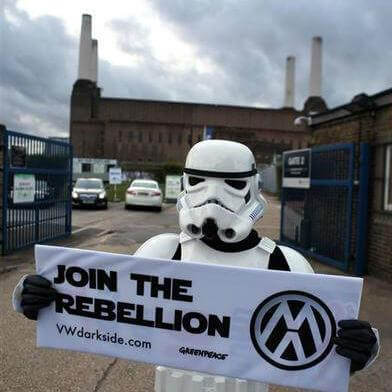 The latest instalment of Greenpeace’s campaign against Volkswagen’s perceived lack of eco-credentials continues the Star Wars theme. Greenpeace are staging a faux-launch of a Golf 7 Jedi Edition that coincides with VW’s own launch of the new Golf this month. The ‘Return of the Jedi’ is another way in which Greenpeace is using Star Wars imagery to gain viral publicity for its claims that VW and other car manufacturers are lobbying against initiatives to reduce emissions and dragging their heels to make greener cars more accessible.

The Car Wars saga began in 2011 when VW used a Star Wars themed commercial to promote the Passat. Greenpeace at the time was highlighting the car manufacturer’s opposition to forthcoming changes to CAFE (Corporate Average Fuel Economy) regulations in the United States and to European legislation that sought to impose further limits on the amount of C02 that new vehicles are allowed to emit. Greenpeace sent Imperial Stormtroopers to greet executives from the auto industry before a meeting of the European Automobile Manufacturers’ Association in Belgium and cast VW as having a Dark Side in a spoof-remake of the Passat commercial. In the Greenpeace video the Rebel Alliance are environmental protestors and the VW headquarters are imagined as the Death Star.

The latest Greenpeace video shows a journalist arriving at VW to present an award for its green achievements only to be confronted by the deathly Darth Vader himself. The implication is that behind the company’s green window dressing lies a much more sinister agenda. The Greenpeace blog promoted the ‘launch’ of the Jedi Golf last month by arguing  that “for years VW has failed to put its money where its mouth is and commercially produce cars that are both cheap to run and emit far less CO2 than the rest of the market. Instead it has added these features to its ‘concept’ cars, producing a new one almost every year but never bringing it to market.” The concept car is lambasted by Greenpeace in its claims that the spurious Golf 7 Jedi Edition is a hybrid diesel that does 315 miles per gallon or has a petrol engine that will do 282 miles per gallon and emit 75% less CO2 emissions than your average car.

This continues the argument it used at the time of the 2011 Dark Side stunt that “for every ‘greener’ vehicle VW sells, there are around 15 others which emit much more C02. Volkswagen adds a huge price mark-up for its greener vehicles – way above the cost of the technology – as it tries to cash in on your green conscience”.

The campaign looks set to continue and VW may be regretting the day it approved a Star Wars creative for its ad campaign because with just two instalments of the Car Wars saga released so far there are, at least, a further four episodes before the story has run its course.