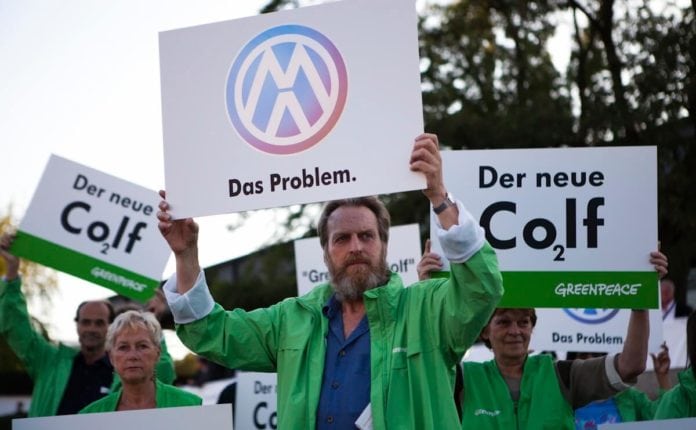 Volkswagen was the subject of Greenpeace‘s wrath this week, when environmental activists picketed the flashy premiere of Volkswagen’s latest Golf hatchback. According to Reuters, Greenpeace accused the German automaker of doing too little to reduce fuel consumption and tarnishing the most important model launch in the group’s calendar.

The seventh-generation Golf hatchback will reportedly retain its predecessor’s base price of 16,975 euros ($21,300). It is the only model the company builds on four continents. Reports say the hatchback is also at the crux of VW’s strategy to overtake Toyota as the largest carmaker in the world.

Greenpeace’s German transportation expert Wolfgang Lohbeck spoke to Reuters. He told the news agency that VW had a unique responsibility since the car sets the standard for the compact class: “The Golf is the car that distinguishes the segment it’s in for the next 10 years worldwide and all carmakers benchmark themselves against it.”

Lohbeck said VW had the expertise to roll out a car whose basic version requires far less than its 4.9 litres for 100 kilometres and urged VW to set the 3-litre mark as its target for the car.

“It’s lame, it’s disappointing,” he complained to Reuters, referring to the actual consumption figure. “It doesn’t really matter that Volkswagen may roll out an electric version of the Golf next year, since it won’t comprise the bulk of the volumes – what’s important is the basic petrol version.”

Volkswagen Chief Executive Martin Winterkorn reportedly dismissed the protest held by a “small band” of demonstrators. He argued the car was the “right answer for rising fuel prices” thanks to model derivatives like the upcoming Golf Blue Motion, which consumes just 3.2 litres of diesel.

Related:   Are Biofuel Cars a Real Alternative for the Average Driver?