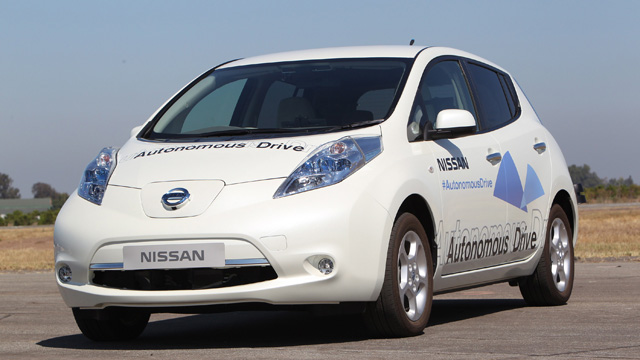 Nissan has been putting a lot of effort into developing green car technology, aiming to become a leader in the green vehicle market. The Leaf, their zero-emission vehicle, is the world’s best-selling all-electric car, and it is one of the most fuel-efficient cars, as well. In addition to hybrid and electric vehicles, the Japanese car maker has been working on autonomous vehicle technology. The autonomous car concept was made popular by Google, which has already completed hundreds of thousands of miles of road tests with its self-driving car, that can now be legally operated on public roads in California, Nevada and Florida. Google is probably ahead of its main competitors, including Nissan, BMW, Audi and Volvo, as far as how advanced their driver-less car technology is, but Nissan is looking to catch up with the computer software giant and plans to introduce a driver-less car on its own by 2020.

The company with headquarters in Yokohama, Japan, wants to implement highly sophisticated equipment in their vehicles that will help prevent accidents and improve traffic safety. In addition, they want to make cars more intelligent in order to reduce traffic jams, which will result in reduced air pollution. The driverless car Nissan intends to create won’t have to stop-and-go as often as conventional cars do, which will make for a better and smoother traffic flow in cities where traffic congestion is a huge problem.

In an effort to show off their autonomous vehicle concept, Nissan organized an event in Los Angeles this past week, called Nissan 360, where they demonstrated what the prototype is capable of. They have decided to test their autonomous drive technology on the all-electric Leaf, which drove at a former military base in Irvine, performing a series of maneuvers, such as merging into traffic, weaving around a series of barrels, driving along a figure-of-eight course, as well as slowing down and stopping at a stop sign. Although during the demonstration, there was a person sitting behind the wheel at all times, the car moved totally independently, and the driver had to be present in case some of the electronic systems failed.

However, no matter how perfectly the self-driving Leaf prototype was performing various maneuvers and overcoming certain types of obstacles during the simulation, Nissan still has a lot of work to do to make a car that will be able to do the same things on public roads, where it will have to share the road with other vehicles and pay attention to pedestrians. In the real world, the car would have to deal with all sorts of unexpected situations and it will have to be able to adapt to changing road and weather conditions, avoid collisions, crossing intersections, and so on.

As Maarten Sierhuis, the project’s co-director stated himself: “We need to be able to drive any intersection anywhere and at any time to be fully autonomous.” That is the biggest challenge Nissan has to overcome, aside from the legal issues, as some sort of legislative that will regulate the use of autonomous cars is yet to be put into effect.