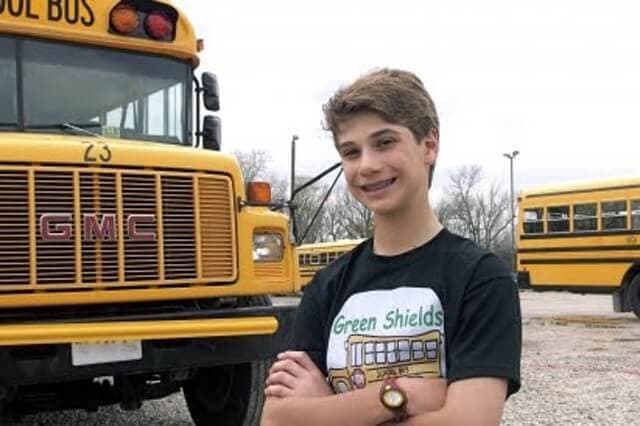 What were you doing when you were 17? For me, I was chasing boys and preening my hair. And chances are, many of you were doing the same. But one 17-year-old in Illinois is way ahead of the game. He’s trying to revolutionize the way students get to class.

Back when Jonny Cohen was just 12-years-old, he had an idea. His vision was to take clunky, energy-wasting school buses and transform them into something grand. Jonny wanted to turn them into sleeker, aerodynamic vehicles that were more fuel-efficient. And ultimately, he wanted to save money for thousands of American schools that rely on buses to transport their students.

According to The American School Bus Association, school buses are remarkably inefficient, getting an average of just seven miles per gallon. Compare that to a private car, which can average over 20 mpg. And the nation’s school buses reportedly use more than 800 million gallons of gas each year. It’s no wonder why Jonny wanted to turn things around.

So his idea was to attach plexiglass shields to the front of the bus that would redirect airflow, making the bus more aerodynamic. This would ultimately reduce drag and save gas.

Jonny had become inspired immediately after taking a summer course about aerodynamics at Northwestern University. He told family members about his idea and they enthusiastically gave it a thumbs up. Shortly after, Jonny received a $1,000 grant to attend the 2009 Youth Venture Summit at MIT and develop his vision.

Jonny is now 17. And his organization, the GreenShields Project, is well on its way to achieving its dream. The current version of the green shield was designed with help from Northwestern’s Segal Design Institute. ClimateWire reports that it is more like a “ski jump shaped hat installed on the roof of the bus.” Tests show that the shield “improves fuel economy 10 to 20 percent.”

This year, Jonny won a $25,000 grant from Pepsi to create and test a full-scale version of his invention on school buses.

Reports say the shields are currently getting a trial run with an environmentally-conscious bus company called Cook-Illinois Corp.

There are a couple of remaining hurdles though: obtaining permits from the Environmental Protection Agency and the Department of Transportation before the team can produce the shields for the mass market.

But even still, Jonny remains optimistic and says he has several other inventions on the go as well.