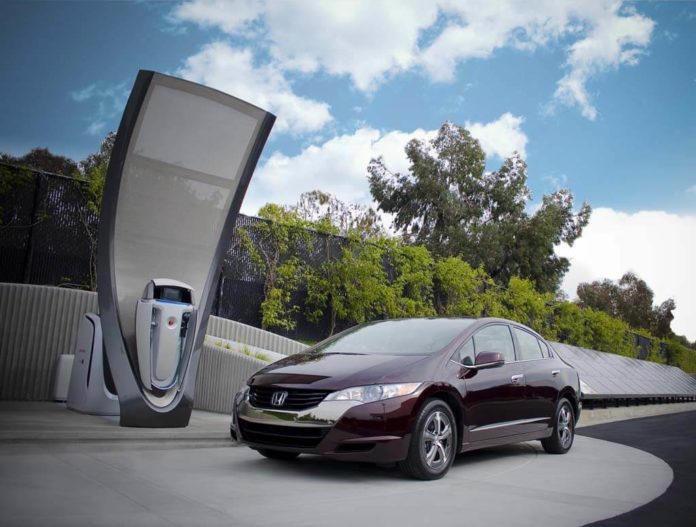 The lack of fueling stations – along with high production costs, is clearly one of the biggest hurdles for hydrogen cars, so until these issues are resolved, vehicles powered by hydrogen won’t become commonplace. As far as costs are concerned, car makers are trying to develop more affordable fuel cells, which would definitely bring the price of hydrogen cars down, but when it comes to fueling stations, a much broader effort from both the auto industry and government is needed to put the proper infrastructure in place.

Of all states, California has done the most in terms of promotion of hydrogen powered cars and encouraging a wider adoption of these alternative fuel vehicles. California has been investing heavily in the construction and installation of fueling stations across the state, and offering various incentives to those who decide to purchase one of these vehicles. Currently, there are over 20 stations in California, and the state has announced plans to install a total of 100 stations within the next 10 years. However, the pace of installing fueling stations could be much faster and a recent research study conducted by Sandia National Laboratories may help speed things up.

Sandia National Laboratories completed a study that found many existing gas stations in California could accept hydrogen and cater to fuel cell vehicles. Integrating hydrogen storage into gas stations is a far cheaper option than building new hydrogen fueling stations from the ground up, considering that the construction of an entirely new station can cost up to $1.5 million. Researchers at Sandia examined 70 gas stations in California, and found that 14 of them could integrate hydrogen fuel right away, while another 17 only need some property expansions before they could be ready for it.

According to the report released by Sandia National Laboratories, the 14 stations that could readily accept hydrogen meet the requirements of the National Fire Protection Association (NFPA) hydrogen technologies code from 2011 – which includes guidelines for the storage, generation, use, piping, and generation of hydrogen. The NFPA hydrogen technologies code is an important tool for making sure that hydrogen fueling stations are operated in a safe manner, since there are serious flammability hazards involved in handling hydrogen.

Researchers were particularly focused on the distance between the different elements of the fueling infrastructure and public streets as one of the key factors to ensuring the safe operation of fueling facilities. “Whether you are filling your car with gasoline, compressed natural gas or hydrogen fuel, the fueling facility first of all must be designed and operated with safety in mind,” said Daniel Dedrick, hydrogen program manager at Sandia.

Chris San Marchi, manager of Sandia’s hydrogen and metallurgy science group, explained that scientists need to examine the potential safety hazards if there is a hydrogen leak at an existing gas station:

“If you have a hydrogen leak at a fueling station, for example, and in the event that the hydrogen ignites, we need to understand how that flame is going to behave in order to maintain and control it within a typical fueling station.”

At the moment, there are about 120,000 gas stations in the U.S., and the study Sandia National Laboratories conducted shows that many of them could cater to hydrogen fuel cell vehicles, which would definitely help expand the hydrogen fueling station network, without having to invest hundreds of millions of dollars in an entirely new infrastructure.