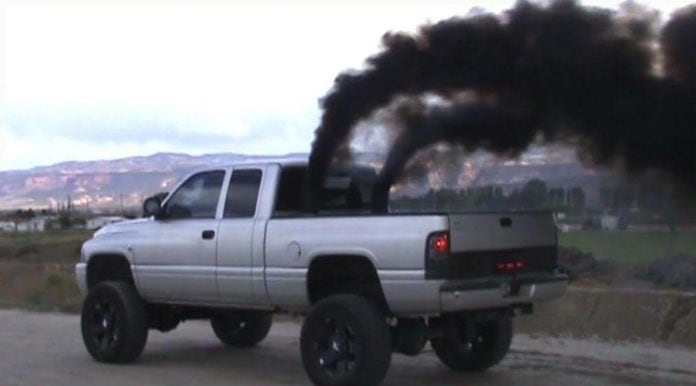 Are you ready to be really irritated at some obnoxious behavior and waste of resources? Are you ready to read about some pro-fossil fuel, anti-Obama, anti-environmental trolling adventures?

Oh. Well, you probably shouldn’t read this then…

Introducing “rolling coal” –  the sub-cultural, anti-social behavior of the week!

For as little as $500, pro-fossil fuel advocates have started to modify their diesel truck so that they emit black smoke as they drive.

Yup. You read that correctly.

These diesel trucks are installed with a smoke stack. The equipment supposedly allows the driver to “trick the engine” into thinking it needs more fuel, and tada! Presto! A magical deathly burst of black smoke can be streaming from your car in no time! 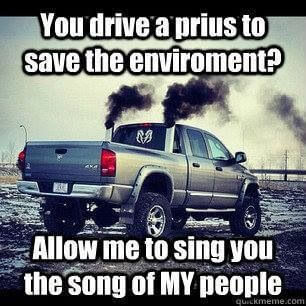 The new trend is a mixture of stupidity, political and cultural statements, the ever-increasing negative feedback towards hybrids, protests against the EPA and, of course, a fantastic show of general anti-environmentalism.

Rolling coal has been an on-going way for people to let off some steam toxic fumes, but it’s only recently become a part of the online culture wars. The Facebook page Rollin’ COAL already has over 15,000 views, and their Twitter and Tumblr pages reportedly have surpassed the 100,000 mark. But it’s not the only time that we’ve experienced this type of anti-environmental backlash.

Related:
The Coal Monster - Selling our Souls for Electric Power.

Similar anti-environmentalist actions were taken in response to Earth Hour. Earth Hour, which began in 2007, encouraged people not to use electricity during a specific allotted hour.

However, it was met with competition from libertarian Competitive Enterprise Institute with “Human Achievement Hour” in which people were encouraged to keep their lights on and use more electricity. People were asked to “celebrate the achievements of humanity such as eating dinner, seeing a film, driving around, keeping the heat on in your home”. The point was to expose how the people turning off electricity are just preening, when they have access to technology and medicine that the global poor are being denied.

Rolling coal appears to have “anti-Obama” connotations, as many people state that it’s a response to Obama’s eco-friendly policies. One response goes as far as saying that “the feeling around here is that everyone who drives a small car is a liberal. I rolled coal on a Prius once just because they were tailing me.” Another unnamed Wisconsin seller told Slate’s David Weigel that “If he’s into the environment, if he’s into this or that, we’re not. I hear a lot of that. To get a single stack on my truck—that’s my way of giving them the finger. You want clean air and a tiny carbon footprint? Well, screw you.”

Whether they’re just blowing smoke, or the coal rollers really do have political motivations behind this new trend, the consequences are more than we can simply shrug off. Protestors of the fad have stated that the diesel trucks emissions are actually hazardous to other drivers, as the black smoke impairs their vision. Others have also argued that the truck’s targeting specific people and cars is also dangerous to people’s health, as the emissions are carcinogenic.

Of course, not everyone with a diesel truck is getting on board of the rolling coal train and many of us are hoping that this is the act of a few bad apples and not a growing trend.