Greener IdealHelping you live sustainably
More
Home News Energy How solar powered roadways will save our planet: an in-depth look at... 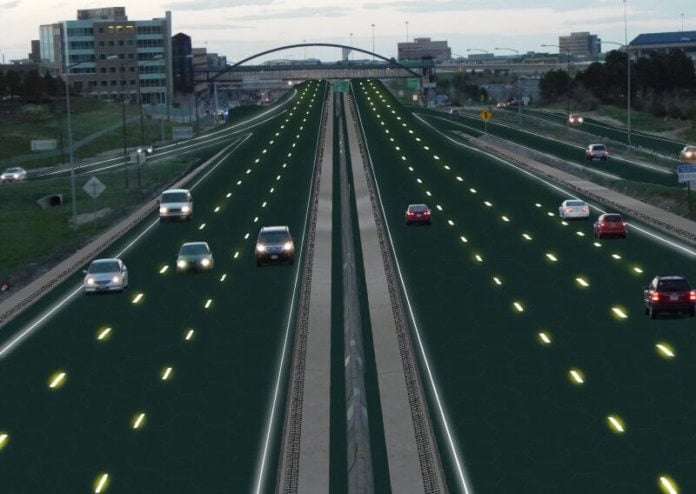 Are solar powered roadways the future?

If you haven’t heard about solar-powered roadways yet, you’re about to be blown away. Recently, the project captured the popular imagination by presenting us with a new solar technology that could potentially revolutionize the way we function in our daily lives by introducing safer, more durable and more environmentally friendly roads. Yes, roads!

The co-founders of this idea are Scott and Julie Brusaw from Idaho, a couple who met as kids in the 60s. The two started to think outside of the box for a solution to greenhouse gas emissions, and that train of thought lead them to look at the roads themselves. Scott, as an electric engineer with 20 years’ experience, is the brains behind the project while Julie, a psychologist, runs the other side of matters. They state on their website  that their “long range goal is to cover all concrete and asphalt surfaces that are exposed to the sun with Solar Road Panels”. The idea is relatively simple one, and it’s definitely grabbed the public’s attention.

The solar panels are created using textured, tempered glass strong enough to hold traffic’s weight. Beneath the glass is smart technology with micro-processors as well as heating elements to keep the road surface clear of ice and snow. The panels are hexagonal in shape in order to easily interlock with one another and LED lights can be programmed in order to create different layouts, road markings or signs.

To date, the Idaho couple have built two prototypes with funding from the Federal Highway Administration. The first prototype was a square 12 x 12 panel that demonstrated the technology’s viability, and once that ticked all the boxes they moved on to bigger and better things with their second prototype. The second prototype was smaller 3 x 3 hexagonal panels that were implemented as a Scott and Julie’s own parking lot.

But the project has only just begun. On June 20th 2014, Solar Roadways’ Indiegogo campaign finished, and the results were outstanding – they more than doubled their initial million dollar goal with $2.2 million!

Solar powered roads and the environment

If solar powered roads are successfully installed, the potential positive impact that they will have on the environment is spectacular. Theoretically, the roads will be able to produce three times the amount of electricity that is produced in the US today. Not only that, the roads will make electric vehicles a much more viable option, with Scott and Julie suggesting that the roads’ energy will be able to be used to power electric cars.

If you haven’t gathered this already, this means that a lot less fossil fuels will be used to create energy. Approximately 50% of greenhouse gasses derive from the burning of fossil fuels to create energy, and this number will be almost virtually diminished with the introduction of solar roads. Moreover, cars contribute another 25% of greenhouse gasses, and with the introduction of the solar powered roads this number will eventually decrease as more and more cars start to utilize the convenience and cost-effectiveness of electric cars on solar powered roads.

I know, how could anyone oppose what seems to be an all-round fantastic idea? Well, there is actually a whole lot of opposition to the project, and most of it pertains to how realistic the project really is.

Much of the opposition states that the cost of creating and implementing these roads would be exceptionally expensive. But while many articles claim to know the estimated cost of these panels, Scott and Julie have stated that the actual cost won’t be known until next month when they begin hiring a team to produce the panels on a larger scale. In order to break even, the team will have to be able to produce 12 x 12 panels for less than $10,000.

Others argue that the cost of maintaining the roads will be excessive, as each damaged panel will be so much more valuable than damaged asphalt. In response, Scott and Julie have argued that the cost of fixing pot holes and general asphalt maintenance is not only equally (if not more) expensive but also largely interferes will traffic. With the panels, technicians will be alerted to a fault in the road immediately, and will be able to drive out and replace the panel with a new one, taking the faulty one back for repair. This will mean that traffic will experience little to no disruption as well as smaller costs with only one panel needing repair rather than the whole area of asphalt that has been effected.

Another fear is that glass will never be as durable as asphalt. While Scott and Julie have countered this by stating that glass is technically harder than asphalt, what they have failed to argue is glass’s traction ability. While the glass that they use is tempered and has been tested as having the necessary traction to stop cars, many argue that with a lot of heavy traffic it will soon lose its traction and become as slippery as ice.

There are also several arguments regarding the panels’ ability to produce energy when dirty, with oil spills, or how well they’ll hold up with tired marks. The project has yet to be tested well enough to address any of these concerns, but Scott and Julie appear to be working hard to prove their “haters” wrong.

Only time will tell how well this idea will play out, but in the meantime: What do you think of the solar powered roadways idea? Is it pure idealism from a not-so-realistic couple? Or a long-running con from a manipulate duo? Or does the project have the potential to mix idealism with reality in order to produce a greener, safer and more cost-effective world?