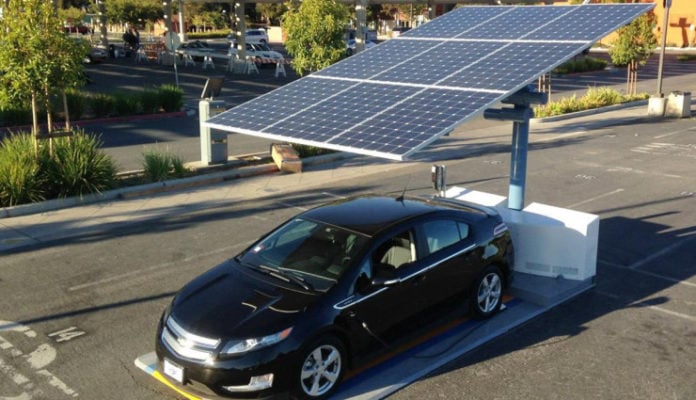 Installing as many publicly available charging stations as possible is one of the most important prerequisites for accelerating electric vehicle adoption in any city. San Francisco has been at the forefront of EV adoption, largely thanks to the extensive EV charging station network, which is about to get even bigger, with city officials recently unveiling a program involving the installment of a couple of charging stations across town that EV owners will be able to use free of charge over the next couple of months.

What’s even greater news than increasing the number of charging stations, is the fact that these latest additions to the charging network rely on clean energy sources to generate electricity. The San Francisco Department of the Environment, in collaboration with Envision Solar and Charge Across Town, an organization that aims to encourage people in the Bay Area to use electric vehicles, has launched the “Driving on Sunshine” campaign, installing solar-powered EV charging stations on three locations around the city.

The main goal of this campaign, that is funded by the 11th Hour Project, is to demonstrate that the electricity used in EVs can be generated from renewable energy sources, without relying exclusively on electricity produced in coal-fired power plants. These stations will be located at the Stonestown Galleria Mall parking lot, the public parking at the Embarcadero at Green Street, and at 17th and Shotwell Streets at a City CarShare Pod.

“This innovative program allows the City of San Francisco to demonstrate that electric vehicles can charge from 100% renewable sources, with no impact to the electric grid and with absolutely zero emissions,” said San Francisco Mayor Ed Lee in a statement.

All three stations will offer Level 2 charging, which will give EV owners an extra 10 miles of range for a one-hour charge. Each of them is equipped with a lithium-ion battery pack that can store up to 22.5 kWh of electricity, and according to Envision Solar CEO Desmond Wheatley, the total amount of electricity all three stations generate in a day is enough for 100 electric vehicle miles.

What’s more, the stations are portable, and are not connected to the grid, which means that they can be relocated as necessary. They are fitted with a heavy baseplate so that they can withstand winds of up to 120 mph. The baseplate also serves as a parking spot for the car that is being recharged. The stations are pretty efficient, as their solar panels move throughout the day to follow the sun and generate as much electricity as possible. In addition to charging vehicles, the solar-powered charging stations will collect data on duration of use and frequency. After the data is analyzed, the stations will be donated to location where the most-frequent use was recorded.

Envision Solar said that one of these stations costs $45,000, but incentives provided by the government help bring that price down significantly. EV owners will be able to charge their vehicles at one of these solar-powered stations for free until June 30.