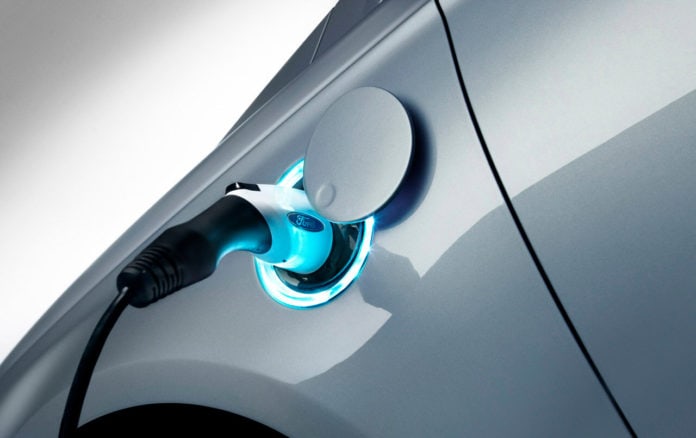 Ford’s 2013 mid-sized sedan Fusion Energi has been awarded the National Highway Traffic Safety Administration’s (NHTSA) a “Top Safety Pick” honor. This five-star safety rating gives yet another boost to the part-electric Fusion Energi’s consumer appeal along with the EPA-rated 100 combined MPG, which is five MPG better than the Toyota Prius plug-in hybrid.

In fact, Ford says April marked Ford’s “best hybrid sales month ever” with Ford’s EV market share up three percent from last year to an all-time high of 18 percent of its fleet. But is the Fusion Energi really worth the price and why consider a Fusion over other plug-ins like Chevy Volt and the aforementioned Prius?

Next, there’s fuel efficiency. Yes, the 2013 Fusion Energi only goes about 21 miles on pure electric power. After the 88kW electric motor runs out of electric battery juice, the Fusion switches to a gas-powered 2.0-liter inline four-cylinder engine. Ford says this means its 2013 Energi gets a combined 188 hp with a top speed of 102 mph.

One of the reasons Ford’s hybrid market share has increased so much is what Ford claims can be a 45 percent savings (or around 24,000 miles annually) in operational costs with their 2013 lineup of five hybrid vehicles. Ford says both its C-MAX and Fusion hybrid models have already been purchased for commercial vehicle fleet upgrades by companies like Esurance, Quest Diagnostics and AT&T. EVs also have less maintenance costs so these factors also figure for better overall efficiency, top notch technology and high resale value.

Con-way, which is a transportation and logistics services company with nearly 500 locations in North America, has purchased 1,000 Fusion Hybrids for its national operations and sales fleets. Collectively, so says Ford, Con-way expects to save more than one million gallons of gas annually while reducing carbon dioxide emissions by as much as 45 percent using Fusion Hybrid as its primary fleet car.”

The same goes for San Francisco-based Esurance. Ford says Esurance chose the 2013 Fusion Hybrid “after an extensive selection process.” Along with better technology, increased safety and a more green footprint from reducing carbon emissions, Ford says Esurance also expects “to save more than 69,000 gallons of gas over the next few years, which translates to a savings of more than $255,000, at a national average of $3.71 a gallon.”

Need another reason to consider this energy-efficient, American-made sporty sedan for your next new car purchase? The 2013 Ford Fusion Energi qualifies for California’s high-occupancy vehicle (HOV) lane status, which makes it one of only nine vehicles to ever qualify for this special lane incentive. What can that mean to a commuter? A lot. In fact, the ability to drive on a carpool lane in daily So Cal traffic can mean a better quality of life with less stress and more free time with loved ones.