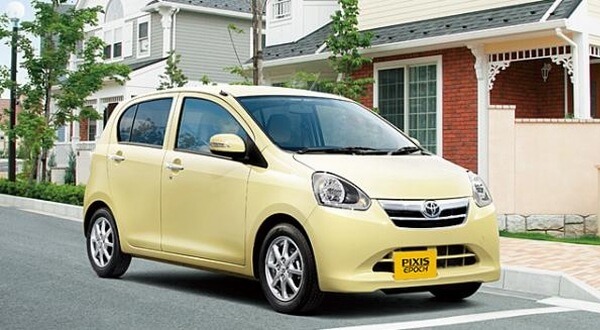 Toyota Motors and Daihatsu Motor Co. entered an agreement in September 2010 to collaborate on a series of new models for Japanese consumers. This collaboration has focused largely on producing eco friendly cars; vehicles that are affordable, miserly with gas, and low on emissions. Toyota announced the release of the Pixis Epoch during a presentation last week. The automaker plans delivery of the Pixis Epoch to more than 200 dealerships in Japan within the next year.

This fourth installment in the Toyota-Daihatsu collaboration achieves the aforementioned goals while providing a comfortable ride for Japanese consumers. The Pixis Epoch also shows that the Japanese market could be the ideal test market for the future of eco-friendly vehicles. 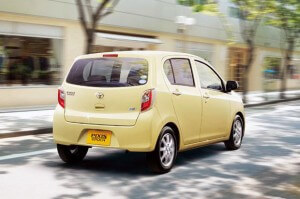 Estimates from Toyota and Daihatsu indicate that the Pixis Epoch can achieve a fuel economy of 70.6 miles per gallon. Toyota also estimates that carbon emissions during typical operation are held to 77 g/km. These metrics fall below the Japanese Ministry of Land, Infrastructure, Transport and Tourism’s 2015 goals for fuel efficiency by 20%.

The eco-IDLE system included in the Pixis Epoch improves fuel economy and emissions by shutting the engine off when the car travels below 5 miles per hour. This start-stop function draws from a lithium-ion battery pack for low-speed operation as well as to restart the engine.

Urban drivers concerned about navigating through heavy traffic need not worry with the Pixis Epoch. The body measures only 133 inches long, 58 inches wide and 59 inches tall. This diminutive frame is ideal in Japanese cities where parking is at a significant premium.

Toyota notes that the minimum turn radius for the Pixis Epoch is 14 feet. Drivers would be able to make quick lane changes and handle sharp turns thanks to Toyota’s focus on urban practicality.

The affordability of the Pixis Epoch stands in stark contrast to the high-priced RAV4 EV presented by Toyota last week. Toyota will price the Pixis Epoch starting from $9,370 while the RAV4 EV was announced at less than $50,000. The export of this model from Japan to the rest of the world would revolutionize the compact vehicle market based on fuel economy, emissions and price. Japanese consumers benefit from additional savings through federal tax credits aimed at green vehicle adoption.

The blueprint for success in the green vehicle market hews more closely to the Toyota Pixis Epoch rather than the RAV4 EV. This compact vehicle can complete tight turns, navigate difficult parking situations and squeeze into traffic common in urban areas. The growth of metro areas in Asia, Africa, Europe and the Americas makes the Pixis Epoch a perfect vehicle for urban residents.

Toyota’s focus on a highly efficient car recognizes that plug-in vehicles and requisite infrastructure must grow in parallel to achieve fuller adoption. The intersection of low emissions and fuel efficiency in the Pixis Epoch shows the regulatory hurdles that new models must surmount before reaching the market. This latest entry from Toyota and Daihatsu also focuses on a low sticker price necessary in a deflated global market.