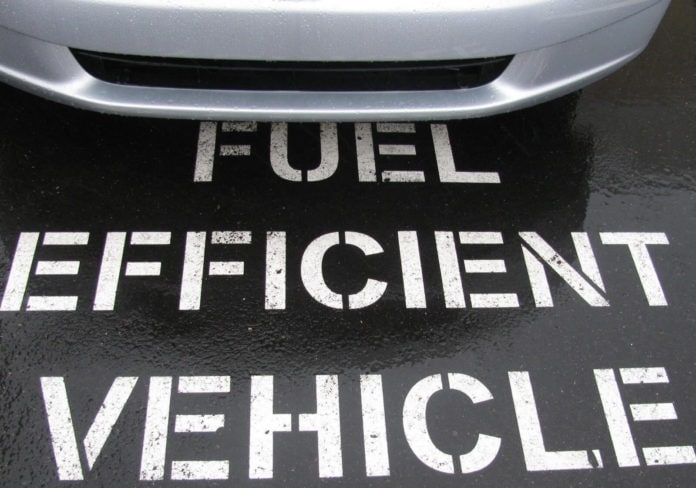 We’re all familiar with the standard MPG (miles per gallon) rating that the EPA (Environmental Protection Agency) puts on that window sticker in every new vehicle. Other countries use a different standard of fuel consumption measurement, basically the reverse, gallons per 100mi or liters per 100km. Both of these measurements seem to make sense, as long as gasoline or diesel fuel is involved, that is, but I think there could be a better measurement.

For years we’ve watched fuel economy increasing on conventional vehicle, and even with the introduction of hybrid electric vehicles, these kinds of numbers still make sense, so it’s easy to compare, say, a gasoline-powered Toyota Camry with its sister Toyota Camry Hybrid. The Camry is rated at 28mpg and the Camry Hybrid is rated at 41mpg. Where things get a little fuzzy is when you want to compare different fuels, such as electricity, natural gas, or hydrogen.

The problem is that these other fuels can’t be measured in gallons. Natural gas is sold by the pound and 5.66lb of natural gas has the same amount of energy as a gallon of gas. Hydrogen is also sold by weight and has three times more energy than a gallon of gas, but a hydrogen fuel cell vehicle can only hold about nine pounds of the stuff, the equivalent of just three gallons of gas. Then there’s electricity, so how do you measure out a gallon of electricity or weigh a pound of electrons?

The answer the EPA has come up with is called MPGe or miles-per-gallon equivalent, and with the introduction of plug-in hybrid electric vehicles and pure electric vehicles, we’ve seen this number climbing sky-high. The Toyota Prius Plug-In Hybrid is rated at 95MPGe and the Tesla Model S 85kWh is rated at 89MPGe. What does that mean?

First, MPGe refers to the energy in a gallon of gasoline, and how much energy it takes to move a vehicle a certain distance. A gallon of gasoline has the same amount of energy as 33.7kWh in electrical terms. Now that we’ve got an electrical number we can work with, we can compare vehicles. This means that a Tesla Model S uses 38kWh/100mi and a Toyota Camry Hybrid uses 82.2kWh/100mi. Put another way, the Tesla Model S uses the equivalent of 1.13gal/100mi and the Toyota Camry uses 2.4gal/100mi. Are you confused, yet?

Then there’s the hydrogen fuel cell vehicle, which measures its fuel economy in miles per kilogram [mpkg], throwing another monkey wrench into our comparison. Let’s try and make sense out of it if we can. The Honda FCX Clarity hydrogen fuel cell vehicle is rated at 60mpkg and the hydrogen fuel tank holds 3.92kg of hydrogen compressed to 5,000psi. One kg of hydrogen contains the energy equivalent of 39.17kWh, so the FCX Clarity uses 65.3kWh/100mi or the equivalent of 1.9gal/100mi. The answer is simple [really?] but the implications are still hard to fathom.

We Need a Change

With all the new alternatives coming on the market, what we really need are numbers that we can use. I mentioned CPM in the title, which I think would be a great new way to measure fuel economy. Not miles per gallon, because we can’t measure electricity or natural gas or hydrogen in gallons. The same goes for the other world standard vol/dis like ℓ/100km or gal/100mi. With the advent of alternative fuels, these measurements have all but become meaningless.

My proposal is actually on two fronts. First, fuels need to be priced according to carbon content. As Bob Lutz mentioned at the 2013 SAE World Congress, “if you want people to use less of a certain commodity, charge more for it,” because supply and demand works both ways. Appropriate pricing will help get people on the right track with what fuels are cleaner than others. Gasoline should be higher priced due to its bigger carbon footprint, while hydrogen and electricity should be priced cheaper because of the smaller carbon footprint.

The second part of the plan would be to change fuel economy measurements to Cents per Mile [CPM], something that every one of us can understand almost instantly. Aside from all other considerations, what we really want to know is how much it’s going to cost for us to fill up every week. Of course, this depends on where you live and the price of fuel in your area, but a couple of quick calculations would tell us that it costs*, in Average, USA:

*Of course, this would be different for each vehicle, fuel, and location, but I’m sure a simple conversion calculator could make this simple and easy to understand for everyone.