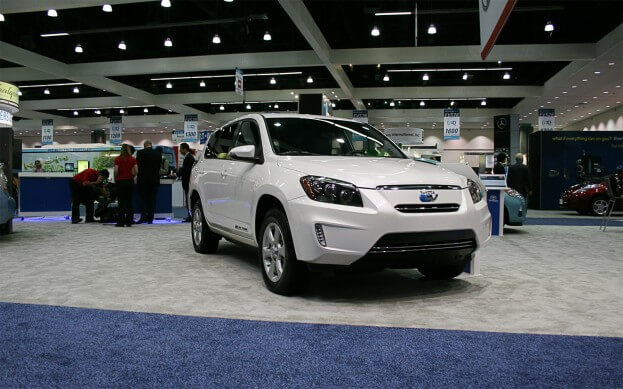 Toyota became synonymous with efficient cars in the last decade due to the Prius. This ubiquitous hybrid sedan broke through the crowd of gas-guzzling models to attract crowds beyond the usual early adopters. The future of Toyota could be defined by the RAV4 EV presented at the EVS26. The RAV4 EV borrows styling and handling from the standard model while allowing all-electric transportation. Representatives from Toyota indicated that the RAV4 EV will be available from $49,800 in San Diego, Los Angeles, San Francisco and Sacramento by August.

The RAV4 EV drive system is powered by a 41.8 kWh lithium-ion battery pack as well as an 115kW electric motor. Toyota installed a 10kW charging unit that allows for complete battery recharging in about six hours. Each battery pack is covered by an 8-year/100,000-mile warranty. The automaker will work with EV equipment supplier Leviton to sell 9.6kW home chargers that allow efficient charging. Drivers can also use a 120-volt backup cable that connects easily to standard outlets. 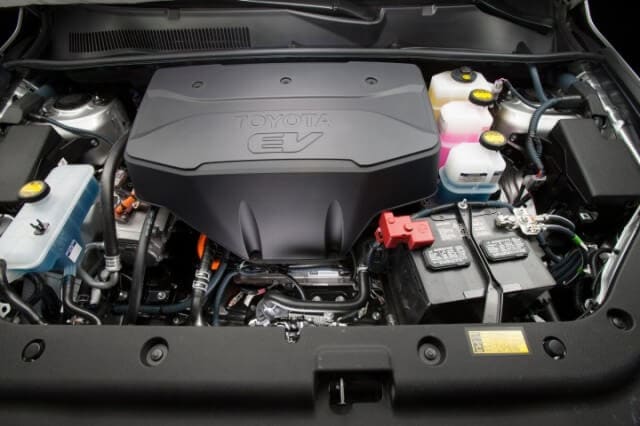 This zero-emissions EV combines sufficient commuting range with enough power to satisfy traditional drivers. Vehicle owners can customize their driving experiences by switching between Normal and Sport mode. The Normal mode allows the RAV4 EV to reach a maximum speed of 85 miles per hour and hit 60 MPH from a dead stop in 8.6 seconds. The Sport mode cranks up the intensity with a maximum speed of 100 MPH and a 0-60 time of 7 seconds. The RAV4 EV allows the typical commuter to complete multiple trips before thinking about recharging the battery.

A few tweaks to the RAV4’s body allow Toyota to keep the curb weight within a few hundred pounds of the original model. The EVS26 presentation noted that the RAV4 EV is about 470 pounds more than the original with a curb weight of 4,032 pounds. Engineers lowered the vehicle’s center of gravity to ensure safety while decrease the impact of curb weight increases on fuel economy.

The RAV4 EV uses newly designed bumpers, grills, mirrors and underbody components that create a smoother ride. Toyota also placed the battery pack as low as possible in the center of the vehicle as part of the redesign.

Toyota has come under fire from advocates for greener transportation due to their plodding approach to vehicle research and development. The Prius remains Toyota’s signature hybrid but this technology has not evolved much over the past 10 years. A “slow and steady” pace does not work well for cars but seems even worse for automakers in the current economic environment.

The RAV4 EV emerged from Toyota engineering facilities after nearly two years of designing and testing. A projected 2,600 units will be sold over the next three years, which hardly represents a broad rollout. Toyota has also placed the vehicle beyond reach for most consumers with a nearly $50,000 price tag. The technology involved with the RAV4 EV is impressive but Toyota has dropped the ball by not replicating the successful Prius formula.