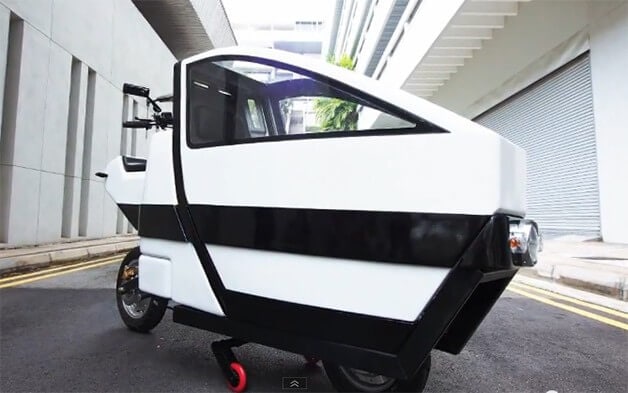 The 3rd Taiwan International Electric Vehicles Show earlier this month highlighted zero-emissions vehicles from around the world. A unique prototype shown in Taiwan was the VOI concept scooter designed as part of Project VOI. This two-seat scooter was designed by more than 100 designers and engineers at the Technical University of Munich as well as the Nanyang Technological University in Singapore. Project VOI employed the technical knowledge and imagination of engineering students in their final years to solve the problems of urban transportation. The VOI electric scooter not only advances the ubiquitous scooter into the 21st century but offers a platform for future designs.

TUM and Nanyang engineering students develop an all-electric drive system that allows the driver to navigate urban environments. An operator can hit 28 miles per hour in the VOI, which is sufficient for local transportation. The battery pack can operate for 50 miles between charges and allows the driver to move around the city without range anxiety. Scooter drivers in metro areas around the world are no doubt envious of these performance metrics. The VOI might be a concept at present but a production version would be popular for the right price.

A unique seating arrangement separates the VOI from the standard cab, wagon or scooter. The VOI places the passenger ahead of the driver in an enclosed seating area with ample windows. Project VOI members were concerned with ensuring passenger safety, which can be problematic aboard open-air vehicles. The driver sits behind the passenger compartment on a raised platform that ensures full range of vision along with protection. Students at TUM and Nanyang aimed for a two-seat, two-wheel vehicle that could handle like a scooter but keep passengers safe like a car. The VOI seems to fit that mold by marrying the rigid structure of a vehicle body with responsive handling.

Related:
Vespanomics Infographic: Why Riding a Scooter is Eco-Friendly

Another reason why the VOI received some notice in Taiwan is the versatility of the vehicle frame. The passenger compartment can be removed with little difficulty if the VOI is needed for other uses. A maintenance crew can swap out the passenger seat for a tool box. The VOI could be converted into a cargo carrier by installing a flat bed or storage box. An enterprising restaurateur could remove the passenger seat for a lunch cart that could be moved from location to location. The VOI platform is ideal for the myriad pursuits of urban dwellers.

Scooters, bikes and pedicabs are commonplace in big cities from New York City to Tokyo. Project VOI aimed for an all-electric scooter that is safe, reliable and inexpensive. We don’t know the cost of the VOI scooter but the concept shown in Taiwan dovetails nicely with a trend toward urban vehicle development. The VOI could be used by individual drivers, cab companies, police departments and maintenance crews without eating up space in increasingly crowded cities. This scooter concept could be incorporated into car-sharing and public transit schemes that attempt to resolve mobility gaps. Project VOI has not only produced an intriguing alternative to the gas-powered scooter but stoked interest in urban transportation solutions. 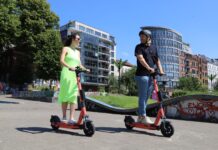