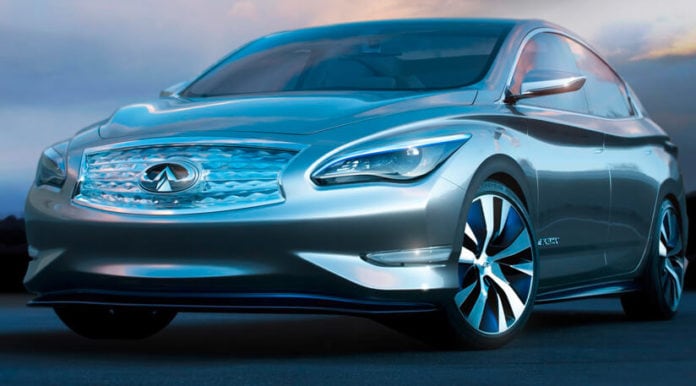 At the 2012 New York Auto Show this week, Infiniti unveiled its first electric vehicle, the “Luxury Electric,” or LE, Concept. This concept design—based on the same platform as the Nissan Leaf—emphasizes luxury in addition to pure economy.

Much like the exterior, the interior of the vehicle boasts some familiar Infiniti cues. The concept vehicle comes equipped with a double-wave design with LEDs flowing from front to back. The center console has a large, LCD screen designed for infotainment system control. According to brand representatives, the luxury carmaker promises that 85 percent of this purely electric vehicle will translate into production—minus some car-show-only design flourishes, like the illuminated grille.

So, what makes this vehicle tick? For one, the LE Concept is surprisingly powerful for an E.V. It consists of a 134-horsepower electric motor and 240 pound-feet of torque. By comparison, the Nissan Leaf is rated at only 107 horsepower. Housed in the floor, a lithium-ion battery powers the electric motor.

Infiniti claims that this front-wheel-drive, compact sedan boasts an estimated driving range of 100 miles on a single charge. Nissan recently explored—and has now implemented—a wireless charging system via a black pad beneath the rear quarters of the car. Infiniti strives to be the first luxury car brand to introduce wireless charging to the market.

Engineers behind the LE concept’s e-powertrain aimed for a smooth and silent response to accelerating from a start and re-accelerating, such as changing lanes or merging onto highways. For maximum range, the car has regenerative brakes, specifically-designed aerodynamic 19-inch wheels, and low tires.

Withall the LE Concept’s design elements and technological features, Infiniti hopes to introduce its first zero-emission luxury sedan within the next two years. Car experts estimate that the LE will cost prospective buyers upwards of $40,000, excluding federal and state incentives. All good things for those who wait!