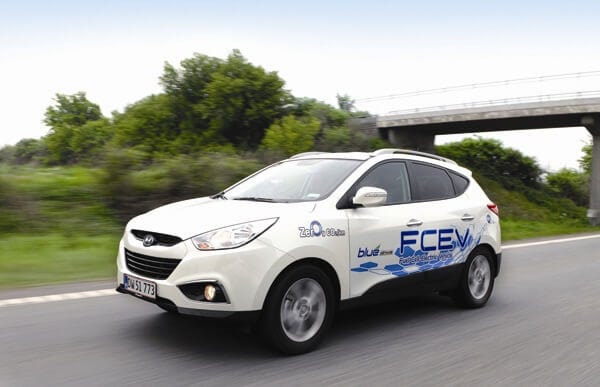 Hyundai has sped off the start line in the hydrogen vehicle production race, by rolling the first fuel cell vehicle intended for mass production off of the assembly line.

Hyundai have created a version of the ix35 which runs completely on hydrogen, meaning the only by product this car produces is water. The zero emissions vehicle is the product of the millions that has been invested into fuel cell research by the Korean company. The competition is beginning to build when it comes to environmentally friendly driving, with car manufacturers publicising future plans for a zero emissions driving environment.

Hyundai motor Vice Chairman, Eok Jo Kim announced the new ix35 as ‘the most eco-friendly vehicle in the industry.’  He went on to add that it ‘proves that hydrogen fuel cell technology in daily driving is no longer a dream’.

Fuel cell engines are not a new concept, in fact the first fuel cell vehicle came about in 1959. However, the technology has always been too expensive to develop for the mass market, hindering its advancement for the past fifty years, but Hyundai’s commitment to the cause has allowed the technology to be developed to mass market potential. 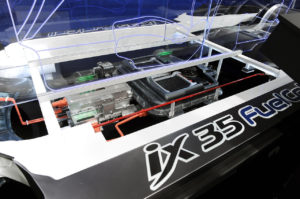 Fuel cell engines work by replacing gas with hydrogen. The hydrogen is combined with oxygen within the engine, creating a chemical reaction. This chemical energy is then converted into electrical energy, which in turn powers the motor in the engine. When fuel cell technology is compared to the current ‘plug in’ electric engines, the results show us that fuel cell engines are a way of sustaining our current driving habits, without causing any harm to our environment.

One thousand ix35s are due to be built by 2015. They are first to be made available as fleet vehicles across Europe, available for public and private vehicle leasing. After this Hyundai are planning to release the vehicle for consumer sales, with the hope of lower production costs and a more developed refuelling network.

The European Union has established a hydrogen road map, containing plans for new hydrogen refuelling stations throughout the continent. With hope that fuel companies will help develop the necessary technology to help put this plan into action across Europe and then the US.

Our attitude towards oil is unsustainable when it comes to our planet as well as our supplies, and this is forcing the automotive industries priorities to change. Car manufacturers are finally using their resources to develop technologies that will sustain the vehicle industry and the planet.  Responsibility is now being handed to the gas companies, with the automotive world asking them to help develop the necessary technologies to make electric driving a viable option.