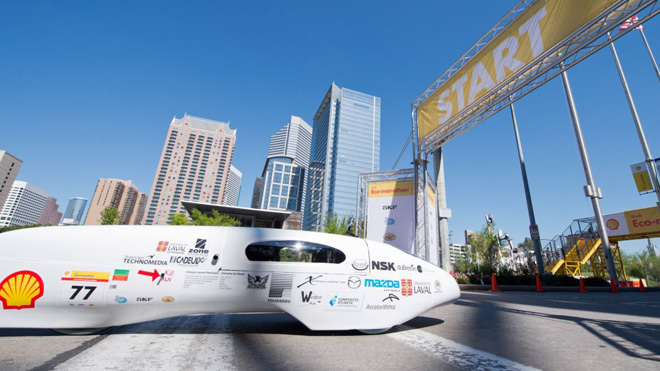 More than 120 teams throughout North, Central and South America convened in Houston, Texas this past weekend for Shell Eco-Marathon Americas 2013. This event challenged teams of high school and college students to design vehicles that travel far on a single liter of fuel. The Americas race is the first in a trio of Eco-Marathon events slated for 2013 including a May race in Rotterdam and a July race in Kuala Lumpur. Qualifying teams competed on a 0.6-mile loop around Houston’s Discovery Green Park with 10 laps required to qualify for awards. The innovative vehicles displayed in Houston might not have hit high speeds or traveled long distances but show the potential for greener designs in the future.

The Alerion Supermileage team from Laval University in Quebec reached the highest fuel economy during the three-day competition. A gas-powered prototype called CT 2.0 achieved an estimated fuel economy of 3,587 miles per gallon during the final day. The Laval University team has been competing in green vehicle events since 2008 and developed an effective template for success. CT 2.0 used an incredibly efficient engine as well as a lightweight body made from carbon-fiber panels to set the competition record. Alerion Supermileage might not be able to replicate similar results in more strenuous competitions but the team earned the top spot through ingenuity. 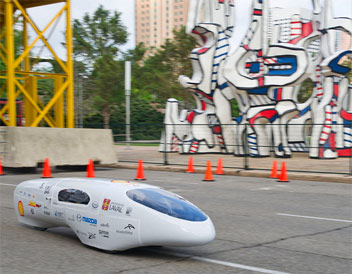 The success of Laval University and Mater Dei High School should not obscure successful entries by other teams. H2 Eco-Challengers from the University of Colorado-Denver won the Prototype Hydrogen category with a fuel economy peak of 54.1 miles per kWh. Cedarville University in Ohio topped the Prototype Gasoline field in terms of emissions with a miniscule 4.512 g/km. The Prototype Electric field behind Mater Dei included Innovation Station in Grand Rapids (282.2 miles per kWh) and Duke Eco-Marathon (224.2 miles per kWh). The robust competition among teams big and small is heartening for those concerned about the future of green technology.

Our next generation of engineers, designers and auto industry experts are participating in Shell’s Eco-Marathon events. We can criticize the event’s sponsor for representing our dependence on oil or the limitations of the event in testing future technologies. These critiques are certainly fair though it is a bad idea to downplay any steps taken to reduce emissions and increase fuel economy. Student teams used their own creativity, technical knowledge and hard work to create green vehicles that should inform production models in the future. The next barrier to break down is not just the world record of 8,914 MPG set in 2003 but chipping away at the pessimism about green vehicle technology.