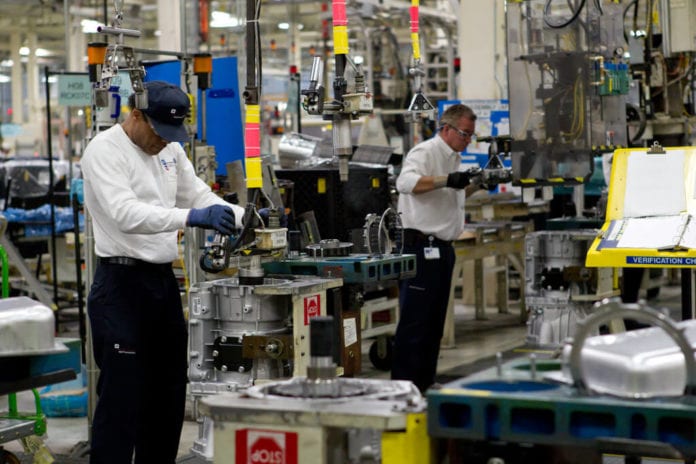 Many global automakers are trying their best to reduce manufacturing impact on the environment. Some of their efforts include reducing energy and water use, recycling, installing energy-saving lighting in their plants, but the most effective way to make the manufacturing process greener is switching to alternative power sources. There are many energy sources that are clean and are not harmful to the environment, such as solar and wind power, and more and more car makers are setting up photovoltaic systems and installing wind turbines to generate power for their assembly plants. In addition to these sources, some manufacturers have started using landfill gas to supply their energy needs, which is a great way to reduce carbon dioxide emissions.

In December, 2013, General Motors announced that it will expand the use of landfill gas at its assembly plants in Fort Wayne, Indiana, and Orion, Michigan, which they are going to make an initial investment of $24 million for. The Orion plant first started using gas back in 2011.

Now, the latest car maker to adopt landfill gas as an energy source is Toyota, which has decided to start powering its Kentucky assembly plant with gas that it will get from a local landfill waste. The Japanese company has come to an agreement with a local waste management company, Waste Services of the Bluegrass, to generate electricity from their landfill waste and supply power to the assembly plant in Georgetown, Kentucky. This plant is the largest facility operated by Toyota outside of Japan, building about 500,000 vehicles a year, including some of the best performing alternative fuel vehicles, such as the Camry Hybrid and the Prius. Toyota says that the electricity generated from landfill gas will be enough for the production of 10,000 vehicles annually.

Landfill gas is basically a result of the decomposing process of the waste at a trash dump. Most of it is methane, but other gases are created, as well. With the proper technology and equipment, gas can be captured and stored, and used for powering generators. Toyota plans to build several landfill wells, which will capture the gas, and the electricity will then be transported to the assembly plant through underground transmission lines. According to the company’s press release, construction on the landfill wells will start in April, and is supposed to finish by 2015. As Toyota says, the amount of electricity that will be generated this way, which is one megawatt per hour, would be enough to power 800 homes, and it will reduce the landfill’s greenhouse emissions by as much as 90%, which will help improve air quality in the area where the waste management company is located.

One of the reasons why Toyota chose the Kentucky manufacturing plant to be powered by landfill gas is that it’s already one of the greenest assembly plants in the world, as it has been a zero-landfill facility since 2006, which means that it doesn’t send any trash to landfills.

With the decision to use trash to build cars, Toyota once again shows its sustainability commitment, and it boosts its efforts for making its manufacturing process as greener as possible. This is in addition to the company’s waste elimination activities, as well as the fact that it is dedicated to efficient water usage and treatment.