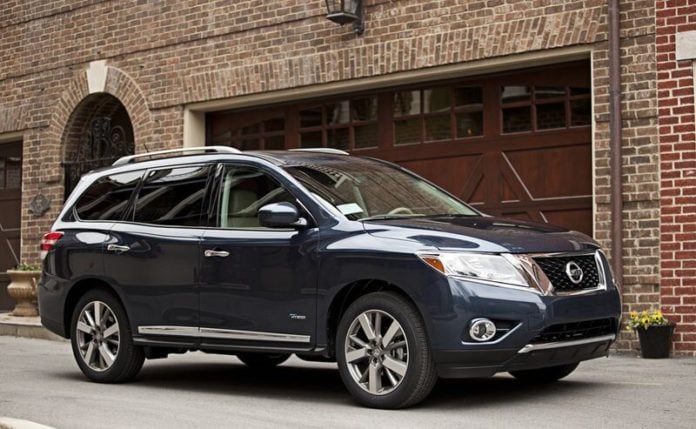 Nissan presented a fuel-efficient version of its popular Pathfinder SUV during the 2013 New York International Auto Show. The automaker touts an innovative FF Hybrid System that allows the 2014 Pathfinder Hybrid SUV to improve fuel economy over the standard model by 24%. The layout of this hybrid SUV remains roughly the same as the standard model with three rows of seats and a sturdy body. Nissan’s fuel economy improvements sound impressive though additional details shine a more skeptical light on these claims. The 2014 Pathfinder Hybrid SUV features advanced technology that is bogged down by a heavy SUV frame.

The FF Hybrid System promoted by Nissan uses a 2.5-liter gas engine and a 15 kW electric motor. The motor not only starts the engine but acts as a generator by transferring energy to the battery when the brakes are engaged. These components replace the standard 3.5-liter, V6 engine used to power the standard Pathfinder. Nissan estimates a maximum output of 186 kW from the FF Hybrid System based on road tests during the past few months. The Pathfinder design team placed the lithium-ion battery pack underneath the third row of seats to maintain cargo room. A regenerative braking system gathers energy typically lost during deceleration to recharge the battery. Nissan plans on offering the 2014 Pathfinder Hybrid SUV in three trim levels to accommodate a variety of customers.

Drivers access three operating modes after starting the 2014 Nissan Pathfinder Hybrid SUV. A driver interested in achieving higher fuel economy can choose the two-wheel drive as the default mode. Nissan now offers an Auto mode that allows the drive system to monitor road conditions and adjust power to the wheels for maximum safety. The four-wheel drive mode can also be used as the default mode to handle off-road driving and commutes in icy or rainy conditions.

The 2014 Nissan Pathfinder Hybrid SUV will cost around $31,500, a $3,000 increase compared to the standard model. A combined fuel economy rating of 26 miles per gallon is a 24% jump over the previous model with 25 MPG in cities and 27 MPG on highways. The vehicle’s 19.5-gallon gas tank and improved engine efficiency allows a maximum range of 526 miles. Nissan was careful to replace the power of a 3.5-liter, V6 engine for traditional drivers. This latest version of the Pathfinder might get better mileage but can still pull up to 3,500 pounds.

We have been trained as consumers to respond to impressive statistics with awe and appreciation. Nissan’s ability to improve the fuel economy of an SUV by 24% sounds substantial but indicates the poor mileage achieved by the average SUV. The 2014 Pathfinder Hybrid SUV is hardly a green vehicle even if features like regenerative brakes, smart driving modes and an electric motor are used. The evolution of the automobile in the 21st century will rely as much on smarter vehicle design as innovative motors or onboard computers. Consumers should be running away from hefty SUVs and trucks when possible to encourage automakers to create lighter vehicles for greener commutes. The intersection of highly efficient drive systems and lightweight frames is essential to an eco-friendly auto industry.