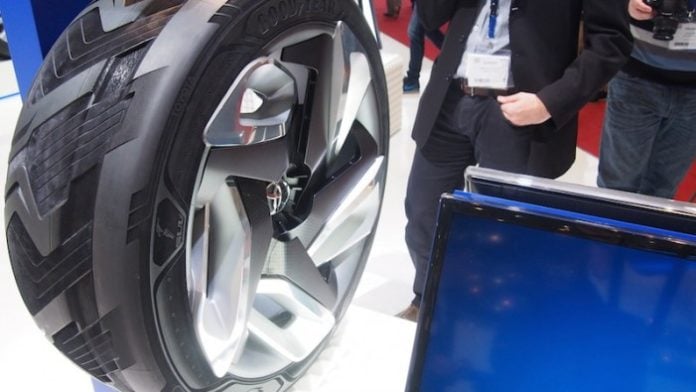 Long charging times are among the biggest challenges faced by electric vehicles and one of the biggest obstacles preventing them from becoming a true alternative to internal combustion engine vehicles.

Increasing the number of fast-charging stations is one of the solutions to this problem, but they are pretty expensive and will continue to be scarce in the foreseeable future, so the auto industry is still looking for alternative solutions.

Goodyear, one of the world’s largest tire manufacturing companies, showcased recently one rather unconventional solution that could be used to extend a car’s range even if there is no charging station in sight.

At the 2015 Geneva International Motor Show, Goodyear unveiled a concept tire that promises to solve the range anxiety issue without requiring installation of additional charging stations or development of more powerful EV batteries.

The Goodyear Tire & Rubber Company introduced a heat-gathering concept tire that can generate electricity as it rolls along the road. The concept is named BHO3 and employs piezoelectric and thermoelectric materials that generate heat energy, that is created by the friction that occurs when the tire gets in contact with the road surface, and convert it into electricity.

The electricity converted by the tires is transmitted to the car’s battery and is used to keep the car running.

“This tire generates electricity through the action of materials in the tire that capture and transform the energy created by heat when it flexes as it rolls during normal driving conditions,” Goodyear said in a press release. “The materials used would optimize the tire’s electricity generation capabilities as well as its rolling resistance.”

The company did not release any details in terms of how much electricity the tires will be able to produce, but it did say that aside from heath, they will capture sunlight, which will also be transformed into electricity.

In addition to the BHO3, Goodyear unveiled another concept tire, named Triple Tube, which features an even more radical design. Unlike the BHO3, it is not aimed at directly extending EV range, but rather at improving a vehicle’s performances, which ultimately affects energy efficiency.

It has the capability to adjust automatically to three different positions, depending on the conditions of the road, thanks to an internal pump that transports air from one main air chamber to three separate tubes.

The three positions include: Eco/Safety position, which reduces rolling reduces by inflating all three tubes as much as possible; Sporty position – providing improved handling; and the Wet Traction position – which maximizes inflation in the center tube to increase aquaplaning resistance.

With these concept tires, Goodyear shows that it is determined to get actively involved in the efforts for promoting electric vehicles and speed up their adoption, by offering potential solutions to the most serious challenge they face – range anxiety.

If they ever go into production, the BHO3 and the Triple Tube might be important factors for solving the puzzle in EV adoption, which the auto industry has been having a hard time finding a solution for in the past couple of years.