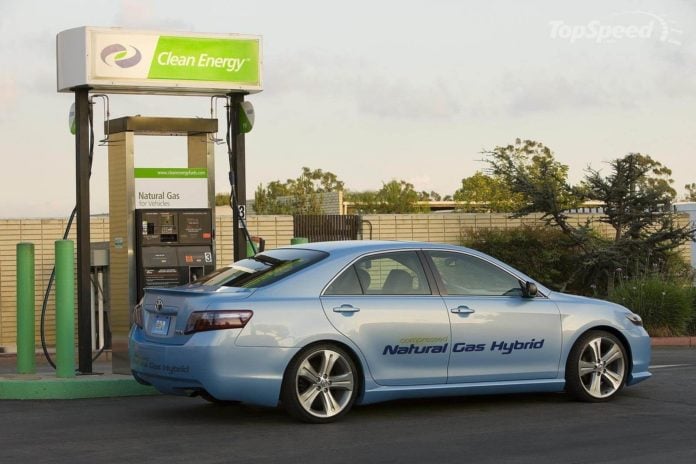 Natural gas is being used by more than half of all household in the U.S. to heat their homes, as well as to power various appliances, such as clothes dryers, stoves, and furnaces. This widespread use of natural gas in American households is mostly due to the fact that it’s much cheaper than electricity and other energy sources. It’s a very clean and abundant energy source, which are only some of its benefits, so the question is why it hasn’t been used to power cars, in addition to powering household appliances.

The Natural Gas Coalition estimates that there are only 130,000 CNG vehicles on U.S. roads today. There are a couple of reasons why natural gas vehicles are not commonplace, including the limited fueling stations and the high purchase price, but there are a few automakers, such as Honda and General Motors, that are looking to change that, trying to build affordable vehicles that run on natural gas.

Just like conventional vehicles, natural gas vehicles are powered by an internal combustion engine, but it uses compressed natural gas, instead of gasoline. In addition to the engine, these vehicles are equipped with another tank where the compressed gas is stored. The car still has a fuel injection system, and it can run on gasoline or diesel, as well, if the driver chooses to turn the stop drawing fuel from the CNG tank and switch to the other tank.

One of the main downsides of CNG vehicles is sheer size of CNG tanks, which are quite bigger than gasoline tanks, and are usually mounted in a car’s trunk, reducing its cargo capacity to a great extent. Also, these CNG tanks are quite expensive to manufacture, which contributes largely to the high production costs of natural gas vehicles. As far as range is concerned, they may have an edge over other alternative fuel vehicles, as they can go over 200 miles before they need to be refueled, but it’s still far from the capabilities of gasoline-powered cars, that can travel about 350 miles on a full tank. This, along with the fact they are not zero-emission vehicles, makes them less environmentally-friendly than electric and hybrid cars. However, they are much cleaner than conventional vehicles, as their CO2 emission levels are about 20% lower than cars powered by diesel or gasoline.

Currently, there are just few signs of the much needed governmental support and there are only a handful of car manufacturers that are putting an effort into building natural gas-powered vehicles. Honda, which already offers one such vehicle on the market, and General Motors, which plans to do the same thing in 2015. Honda is the only company that sells a CNG vehicle at the moment – the CNG Civic, which costs about $26,600, and qualifies for a $3,000 fuel credit. GM, for their part, intends to launch a CNG version of the Chevrolet Impala in 2015, but they are expected to build less than 1,000 units. Even so, these car makers are taking serious steps for promoting natural gas cars, hoping that they will encourage consumers to adopt these alternative fuel vehicles.