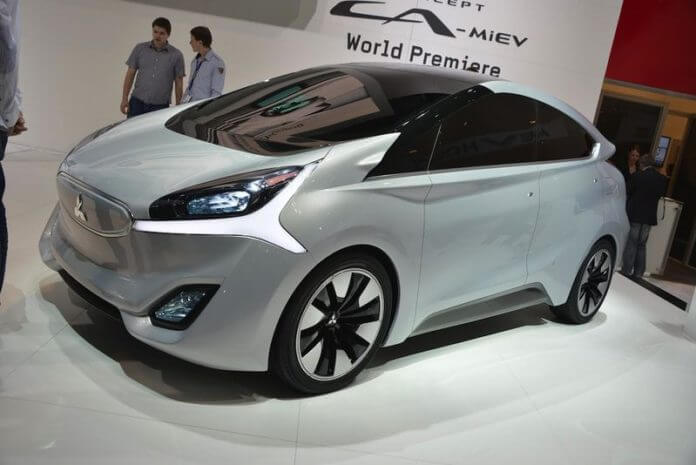 The 2013 Geneva Motor Show offered a good platform for Mitsubishi’s latest innovations. The Japanese automaker has experienced some success in the past three years with the i-MiEV compact car. This all-electric hatchback could soon give way to green vehicle concepts that premiered this week at Geneva. Mitsubishi promoted the CA-MiEV and the GR-HEV concepts as a glimpse into the company’s future. Visitors to the Geneva Motor Show also viewed a production version of the Outlander PHEV. The signature SUV in the Mitsubishi fleet will be available as a plug-in model starting in July.

The Compact and Advanced (CA) MiEV is a more powerful version of Mitsubishi’s first all-electric vehicle. This concept is powered by a 28 kWh lithium-ion battery pack as well as an 80 kW electric motor. Mitsubishi improved the i-MiEV’s regenerative braking system to maximize energy recuperation in this concept model. The CA-MiEV uses magnetic resonance to wirelessly recharge the battery pack. This system is currently in real-world testing by Mitsubishi, WiTricity Corporation and IHI Corporation. An owner could control the vehicle’s climate controls and battery charging using a smartphone or tablet. Drivers can also help in recovering stolen vehicles with the remote tracking feature available from Mitsubishi.

The Grand Runner (GR) HEV is what Mitsubishi refers to as a sports utility truck powered by diesel and electricity. The GR-HEV uses a 2.5-liter diesel engine along with a high-capacity battery and electric motor to provide sufficient range for most consumers. Mitsubishi touted the Super Select Four Wheel Drive as an important step forward thanks to four drive modes that customize the commuting experience. The S-AWC System controls each wheel and brake individually in order to account for changing road conditions. This concept truck produces carbon emissions at a rate of 149 grams per kilometer, an improvement over Dodge, Ford and Toyota trucks currently on the road.

Mitsubishi has been encouraged by the success of the i-MiEV since a global release in 2009. The i-MiEV has sold 22,000 units over the past three years with most sales completed in Europe and Japan. This diminutive plug-in vehicle uses a 47 kW electric motor and 16 kWh lithium-ion battery pack to meet the needs of most drivers. A maximum range of 62 miles per charge is projected for the i-MiEV by the U.S. Environmental Protection Agency. Mitsubishi focused not only on innovative features like regenerative braking but keeping curb weight below 2,400 pounds to achieve sufficient driving range for the average commuter.

Concept vehicles like the CA-MiEV and GR-HEV are often trotted out to auto shows to provide cover for automakers in the short term. Mitsubishi has a very clear path from the original i-MiEV to the Outlander PHEV and the newly presented concepts. These vehicles use technology that has already been tested throughout the world and designs that are attractive to consumers around the world. The most important lesson for any automaker hoping to develop green vehicles is to create multiple models that hit different price points and demographics. Mitsubishi’s latest concepts provide a blueprint for other automakers struggling to bring green vehicles to market.