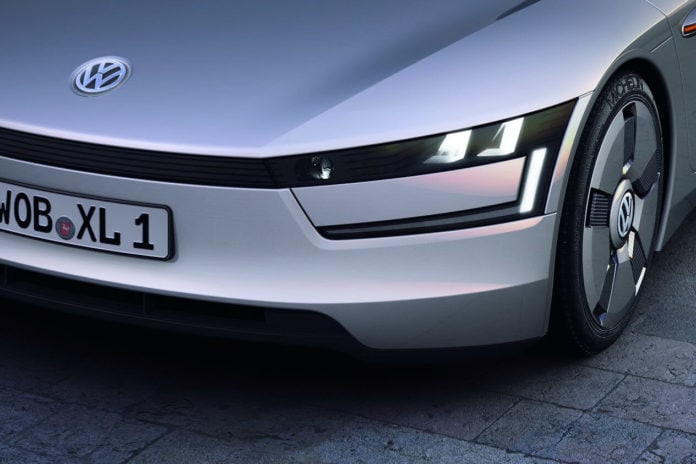 Regardless of the hefty price tag, around 100,000 pounds according to the latest gossip, Volkswagen’s XL1 is a stunning accomplishment in the expanding field of environmentally friendly vehicles. The brilliant Ferdinand Piech engineered this plug-in hybrid coupé to set a new fuel economy world record: 313 miles per gallon! This breakthrough engine delivers 50 kilometers of electric-only power, and the average fuel consumption rate is an incredible 0.9 litres for every 100 kilometers.

The fact that the compact coupé is even smaller than a Porsche Boxter makes the efficiency of this design all the more impressive. The VW XL1 measures 1,153 mm high by 3,888 mm long and 1,682 mm wide; that makes it 129 mm shorter than the Porsche Boxter. Despite the limited dimensions, the lithium-ion battery and electric motor still manage to fit snugly inside the XL1’s highly aerodynamic body.

Piech drove an earlier concept of this vehicle, the L1, from the Volkswagen headquarters in Wolfsburg to Hamburg’s yearly shareholder meeting in 2002 for an impressive presentation. After a decade of further refinement, Piech has finally achieved his dream of creating the ultimate “one litre car.”

What’s the secret behind this automotive miracle in fuel consumption? For starters, the XL1 has an exceptional aerodynamic drag of only 0.189; that’s only about half of the drag of the typical family sedan. Furthermore, the XL1 weighs in at a low 795 kilograms. Combine these factors with a 0.8 litre two-cylinder engine that generates 48 horsepower, a seven-speed transmission with a 27 horsepower electric motor, and the lithium-ion battery; the result is only 27 grams per kilometer of carbon emissions on one official cycle. As for acceleration speeds, the XL1 can reach 62 mph within 12.7 seconds and its maximum speed is 100 mph. Even better, once it reaches 62 mph it only requires 8.4 horsepower to maintain that cruising speed.

The carbon fibre reinforced plastic of the XL1’s body weighs the equivalent of three average people: around 230 kg. This durably sleek construction includes polycarbonate side windows, and it has the safety feature of pyrotechnic screw openings in the doors to allow for easy opening in the event of a rollover accident.

It’s true that the VW XL1’s engine is basically half of a TDI Golf engine and uses similar emissions reducing technology features. The XL1 also shares the concept of a balancer shaft to smooth out the engine’s performance as well. That’s not all; the XL1 even complies with Euro 6 standards thanks to the DPF and oxidation catalyst.

VW further describes the body style as a dolphin shape since it narrows towards the rear. The increased width of the front allows the front passenger to now sit virtually next to the river rather than staggered a bit behind them as in the earlier 2009 L1 model. Although one might not expect any boot space in the back, the XL1 does has a 120 litres of storage space available.

Owners of the XL1 are sure to test out the possibilities for maximum fuel economy, and VW encourages drivers by saying that one can reach over 500 miles with the combination of the e-drive system and TDI engine. How far can you go on one tank of gas? It’s probably further than you ever imagined possible.