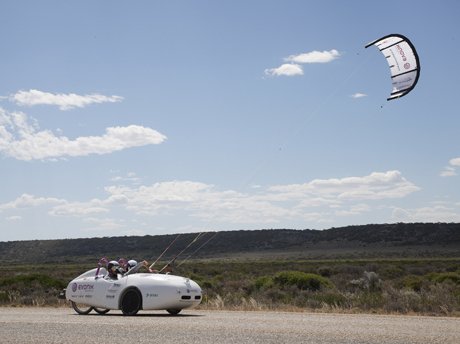 Evonik Corporation recently showcased the Wind Explorer EV at the company’s facility in Parsippany, New Jersey. This all-electric demonstration vehicle just returned from crossing Australia using wind power supplemented by an efficient motor. Evonik solicited help from German drivers Dirk Gion and Stefan Simmerer to pilot the Wind Explorer EV across the 3,000-mile continent. As a bit of context, the vehicle spanned a distance that exceeded the distance from New York City to Los Angeles by 200 miles. The Wind Explorer EV isn’t going to take the auto industry by storm but highlights the potential for alternative fuels.

Gion and Simmerer relied largely on a kite connected to the Wind Explorer EV during their journey. This kite benefited from high winds especially in the middle of Australia, which cut down on energy usage. Evonik notes that the Wind Explorer EV used about $15 of electricity thanks to the free power provided by wind gusts. The drivers also relied on an electric motor powered by lithium-ion batteries developed by Evonik engineers. These batteries featured LITARION electrodes, SEPARION ceramic separators and additional components that facilitate ample energy storage. Evonik also used a special method for tire production that decreased rolling resistance for high fuel economy and almost non-existent emissions. 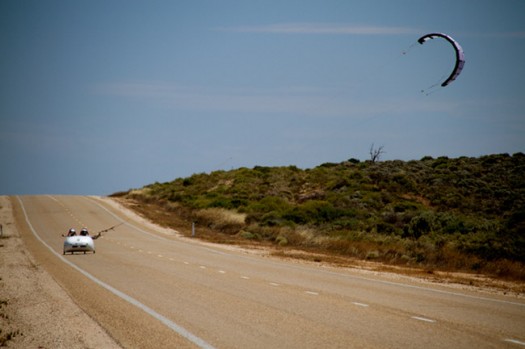 An important factor in the Wind Explorer’s success was a lightweight frame made from Evonik’s ROHACELL carbon fiber panels. These panels contribute to a curb weight of 440 pounds with materials that are comparable to skis or snowboards. The Wind Explorer EV is lightweight but still offers two seats and sufficient leg room for a continental trip. Evonik cited the ROHACELL frame as a major reason why the drive system was incredibly efficient. Gion and Simmerer were able to use electrical power for up to 225 miles per day due to a portable wind turbine, light frame and efficient battery cells.

Difficult conditions and long distances did not deter Evonik’s wind-powered vehicle from reaching its final destination. The Wind Explorer EV traveled through the hot, dry and dusty central region of Australia in the midst of summer. Evonik won’t be bringing this prototype to the market but the vehicle’s success should encourage experimentation with wind power. The push for wind farms in North America and Europe has received resistance but makes sense if we truly wish to achieve emissions-free power generation. Incorporating wind turbines, kites and other sources of wind power into vehicles might seem far-fetched but we should not close doors to eco-friendly vehicle innovations.