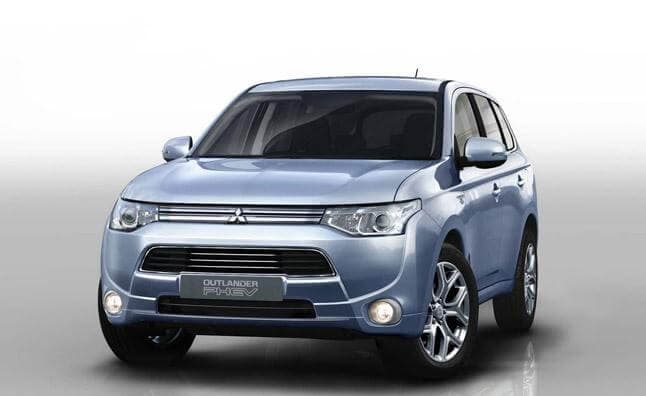 The Outlander PHEV was previewed by Mitsubishi during the 2012 Paris Motor Show. This plug-in hybrid SUV was only months away from production and Mitsubishi hoped to spark international interest. The production version of the Outlander PHEV will be hitting Japanese showrooms starting in a few weeks. Mitsubishi is building support among Japanese consumers while keeping eyes on prospective markets in Southeast Asia, Europe and North America. The pricing and performance estimates for the Outlander PHEV make Mitsubishi’s latest model competitive with the Nissan LEAF, Chevy Volt and Toyota Prius.

Mitsubishi’s Plug-in Hybrid Drive system features a pair of 60 kW electric motors stationed on the axles. A 12 kWh lithium-ion battery pack built from 80 cells provides ample power for all-electric driving as well as long-distance hybrid travel. The Outlander PHEV also uses a 2.0-liter gas engine as a primary power source or generator depending on drive mode. Mitsubishi claims that this SUV can travel up to 37.4 miles on electric power before the engine kicks into gear. This model can achieve combined fuel economy of 178 miles per gallon with a hybrid fuel economy of 44 MPG. The Outlander PHEV can be recharged in four hours using standard charging or 30 minutes using optional quick-charging equipment.

The remarkable fuel economy rating is also achieved thanks to tweaks to the Plug-in Hybrid Drive made prior to the 2012 Paris Motor Show. Mitsubishi notes that the motors act as generators during decelerations and full stops to recharge the battery. The Outlander PHEV also features Battery Charge Mode to keep drivers on the move. This feature uses the engine as a generator for battery recharging with an 80% recharge possible in about 40 minutes. Owners can store electrical power for later use with the Battery Save Mode or distribute power back to home grids through charging plugs.

Related:
Mitsubishi i Electric Vehicle to be Released in November

Drivers alternate between three driving modes accessible by touching buttons on the steering wheel. The EV mode works exclusively from battery power and uses both motors to propel the vehicle at low speeds. The Series Hybrid feature turns the engine into a generator and activates both motors to produce enough power for hilly climbs or bad weather conditions. The Parallel Hybrid mode is used at high speeds with the engine producing most of the power while the motors provide assistance.

Mitsubishi will sell the Outlander PHEV starting from $38,972 though optional features could increase the price up to $50,380. Japanese consumers qualify for tax incentives established by the national government to pump up the domestic auto market. A buyer purchasing the Outlander PHEV with standard charging unit can receive $5,041 in credits by applying to the Next Generation Vehicle Promotion Center. The Outlander PHEV with quick-charging unit qualifies for a tax credit up to $5,393. The price premium for the Outlander PHEV might seem high but we must consider that the plug-in version is only in its first generation. Mitsubishi should be able to reduce the retail price with higher sales volumes and second-generation improvements.