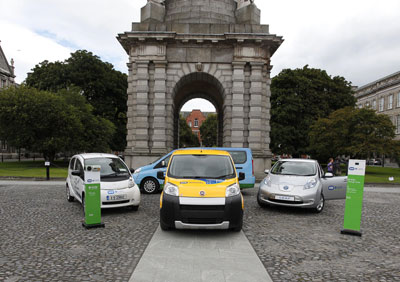 Members of the European Union have committed to ambitious goals for the next generation of automobiles. The European Economic Recovery Plan of 2008 calls for a 60% reduction in carbon dioxide emissions by 2050, which would require broader green vehicle adoption. An initiative called Green eMotion was created in 2011 to streamline EV infrastructure throughout the continent by 2015. This public-private partnership has a long way to go as only 9,132 electric vehicles were registered in the European Union last year. IBM is working with Green eMotion to solve the persistent problem of charging infrastructure with the B2B Marketplace.

The B2B Marketplace uses IBM SmartCloud Enterprise software to create a technical environment conducive to EV adoption. A substantial obstacle to EV adoption in Europe is the jigsaw puzzle of local and regional policies that cannot be avoided with 27 member states. IBM wants utilities, automakers and other players to work through these snarls using B2B Marketplace. A demonstration project starting early next year will determine if this system can be scaled up as European consumers acquire more EVs.

The principle behind this open-source interface is comparable to mobile phone roaming. A motorist traveling from France to Italy will cross through myriad jurisdictions served by regional utilities. The B2B Marketplace allows participants to coordinate billing, communications and data analysis no matter the location. Utilities receive credits when their customers plug into charging devices throughout the Green eMotion network. Analysts with participating universities and institutes receive charging data as part of ongoing research into EV usage. Motorists feel relief when they repower batteries without worrying about surcharges and unwelcome messages on charging stations.

IBM’s work on the B2B Marketplace is a magnification of a Green eMotion project started this fall in Ireland. ESB Networks began work with IBM to create a simplified charging process at 1,000 locations throughout Ireland. IBM developed a cloud-based network called the Intelligent EV Enablement Platform that allows ESB Networks to easily expand their charging locations in the future.

This platform provides ample security for customer information while improving billing and communications processes throughout the network. Green eMotion thus facilitated a microcosm of the B2B Marketplace that could help Ireland reduce carbon emissions significantly by 2020. An increase in EV adoption would compound the positive impacts of the Irish government’s goal of producing 40% of electricity using renewable sources.

A successful demonstration of the B2B Marketplace would be beneficial to the European Union and instructive for the American market. The United States is a maze of local and regional interests that has thus far limited development of a national EV infrastructure. American, Canadian and Mexican governments would also need to cooperate to facilitate international transportation for commercial EVs.

The B2B Marketplace still has plenty of challenges ahead in Europe including continued consumer interest in fuel-efficient diesels rather than EVs. IBM’s work on the B2B Marketplace will be for naught without aggressive efforts to educate the public, create financial incentives and further develop charging networks.