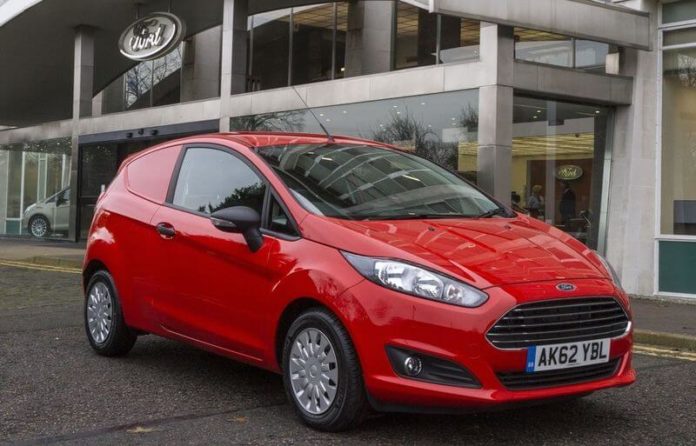 Ford has developed six generations of the Fiesta compact car since the vehicle’s introduction in 1976. The latest generation of the Ford Fiesta has proven very popular in Europe thanks to a more spacious interior and better fuel efficiency. Ford has announced the upcoming release of the Fiesta ECOnetic Van in European markets. This elongated version of the sixth-generation Fiesta will be available with highly efficient diesel engines capable of achieving at least 63 miles per gallon. The automaker has also noted that each version of the Fiesta ECOnetic Van will produce carbon emissions under 100 grams/kilometer.

The most efficient Fiesta ECOnetic Van features a 1.6-liter diesel engine. This version achieves fuel economy of 71 MPG with emissions around 87 g/km. Ford will produce a range of drive systems spanning from a 55kW drive train with 1.5-liter engine to a 70kW system with 1.6-liter TDCi engine. Each vehicle will come standard with an Auto Start-Stop feature that cuts engine power during full stops. Engineers at Ford also added aerodynamic wheel wells as well as low-rolling resistance tires to achieve small cuts in fuel consumptions.

The Fiesta ECOnetic Van seems squarely aimed at small businesses and parcel delivery firms in search of fleet vehicles. The rear cargo area provides about three cubic feet of cargo space with a load length of four feet. Ford estimates a total payload capacity of 1,120 pounds, which would allow drivers to carry packages and luggage without much effort.  This van provides protection for payload with a steel bulkhead separating cargo from the seating area as well as standard tie-downs. The Fiesta ECOnetic Van is a versatile model thanks to ample cargo space and five seats with substantial leg room.

Fleet operators will be attracted to the ECOnetic Van due to a full menu of advanced driving features. The MyKey feature marketed in North America as a safety feature for teenage drivers can be used to manage driving behavior. This feature allows the vehicle owner to limit speeds, audio settings and other controls by computer or smartphone. The Active City Stop function protects drivers from accidents at low speeds using sensors. Ford has also added the Hill Launch Assist and Rear View Camera components to the ECOnetic Van to improve driver safety. Prospective buyers can purchase this model knowing that all of these features have been used by drivers around the world.

Ford has yielded great results from the Fiesta line over the last 36 years with a total of 12 million units sold. The Fiesta ECOnetic Van melds the vehicle’s accessibility and simple design with Ford’s new focus on incremental increases in fuel economy. Ford’s European focus for the ECOnetic Van is shrewd given local popularity of diesel engines and past generations of the Fiesta. The company has also field-tested features like MyKey, Auto Start-Stop and Rear View Camera elsewhere in the fleet. The ECOnetic Van might not reach North America anytime soon due to profitability concerns but Ford‘s strategy has been to incorporate similar technology across various models.