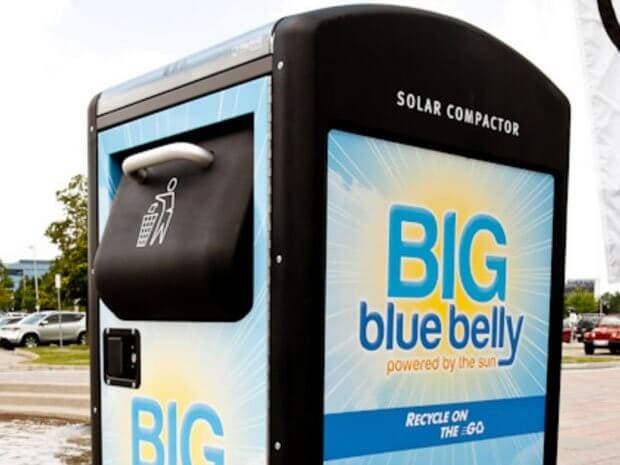 The city of Markham, Ontario has just announced their wide-scale adoption of solar powered recycling compactors on city streets in an effort to achieve zero waste.

The city, located just outside of Toronto, is going to be placing 24 of the “Blue Belly” recycling compactors down the main street and into Unionville in the coming weeks, in what should be considered a pilot program for the rest of North America.

The technology isn’t exactly breakthrough, as solar compactors have been around for years. They have an incredibly simple concept – people throw recyclables into the bin, and when it reaches a certain level the compactor kicks in and compresses the materials to make room for some more. The Blue Belly is designed to take any recyclables, meaning there is only one hole to toss your products into – whether it’s paper, cans, or plastic. Thanks to its compacting feature, a Blue Belly can hold 4-5 times as much material as a comparable non-compacting bin of similar size.

The unique aspect of these solar compactors is the way full bins are collected. Once a ‘Blue Belly’ is full, it emits a wireless transmission signal back to the waste department who only then send a team out to pick up the trash. This feature not only saves on replacing half-full bags, but it also saves on the amount of gas and emissions required for city workers to drive daily routes for garbage pick-up, when it’s not really required.

The city aims to decrease their garbage pick-ups by 50% after the solar compactors are installed.

Not only is Markham going to be increasing the size of their recycling containers, they will also be shrinking the size of their standard garbage bins. The city is urging stores along Main Street to replace any non-recyclable packaging they traditionally give to customers with recyclable materials that can be disposed of in the solar powered compactors, leaving minimal waste, such as chocolate bar wrappers, for the actual garbage pails.

In addition to cutting down on the amount of waste being sent to landfills, and keeping the streets clean, the city also expects to save tens of thousands of dollars. Although each ‘Blue Belly’ costs $4,000 and the city has just ordered 24, they expect to recoup their costs in a few years.

The city will be reporting back on the success of the program in the fall, at which point many other cities should be considering adopting the Blue Belly solar powered recycling compactors for their city streets as well.