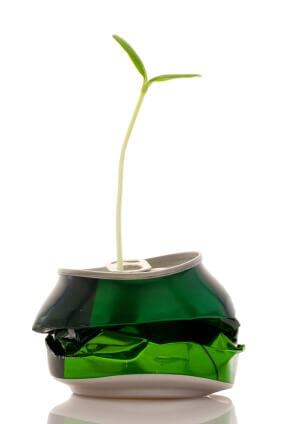 The science of recyclables goes well beyond “blue box/black box.”

Hopefully a significant quantity of the items you use during a day have already been on a number of trips to and through recycling centres. Earth911 and the Huffington Post break down the life cycles of some of our most common recyclable materials

Aluminum cans can be recycled an infinite number of times, and more quickly than any other recyclable material (an aluminum can can be made into another in as little as 60 days).

Paper can be recycled into new reams of paper 5-7 times until degradation of its fibers forces it to be used for other purposes or mixed with “virgin” paper.

Although cardboard can be recycled multiple times over, it too often finds its way into our landfills. In 2009, cardboard made up 11.9% of all waste in the U.S. (National Geographic). Cardboard has an 81.3% recovery rate when recycled correctly.

Glass can be recycled an infinite number of times as, unlike paper, it does not weaken or lose quality when re-purposed.

Plastic, like paper, degrades during recycling, and so weakened plastics are often pieced and woven into other forms. Due to this versatility, the fibers from types of plastic like PET (polyethylene terphthalate), PVC (polyvinyl chloride), and HDPE (high density polyethylene) can be made into a vast series of products including clothing, furniture, carpet, beverage and food containers, cereal box liners, detergent bottles, toys, bags. shrink-wrap, egg cartons, fast food trays, disposable plastic silverware, and CD jackets.