If you’re a cyclist who’s ever wished you could have your own dedicated bike lane for your entire journey – then perhaps this new invention will peak your interest.

There’s a lighting system on the market that lets you project your own personal “bike lane” onto the road surface. Only catch is that it only works in the dark.

The idea is to make cyclists more visible at night. It also encourages motorists to give them a wide berth. More than 20 U.S. states already have laws requiring drivers to give cyclists a margin of at least three feet when passing them.

The tail light of the XFire BikeLane works by projecting two red laser beams onto the ground either side of the bike. The invention can even be customized: You can tailor the width of your “lane” from roughly two to four feet depending on how you angle the unit. And for those of you who like to ride around in a ‘flashy’ manner, you can even choose to have the beams flash intermittently if you want.

The lasers have a maximum strength of five milliwatts. That’s almost equivalent to standard laser pointers.

The device is now available in the UK, which is why the Guardian featured the invention on its site. According to the newspaper, XFire manager, Alex Choi, said the design was inspired by the dangers of cycling in Los Angeles, where he lives: 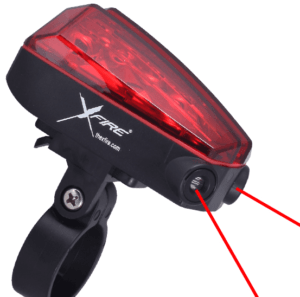 “I commute by bike to work most days, and safety is a serious issue here. You hear about at least one accident every day, and the city has recently passed a law making it mandatory for drivers to give cyclists at least three feet of space.”

But the Guardian asks: Do the lights really improve rider safety, or are they just bit of fun? Blogger Trevor ward decided to test out the device.

Ward writes: “From the rider’s perspective, the beams are certainly impressive – a pair of lasers projecting a bright red ‘force field’ around your bike makes you feel like something out of Star Wars. But if you’re not careful, you could easily spend more time looking at them rather than the road ahead, at least until the novelty wears off. It also occurred to me that having your own ‘bike lane’ projected around you might give you a false sense of security, as some experts believe is the case with helmets.”

The XFire BikeLane retails for about $40 USD.