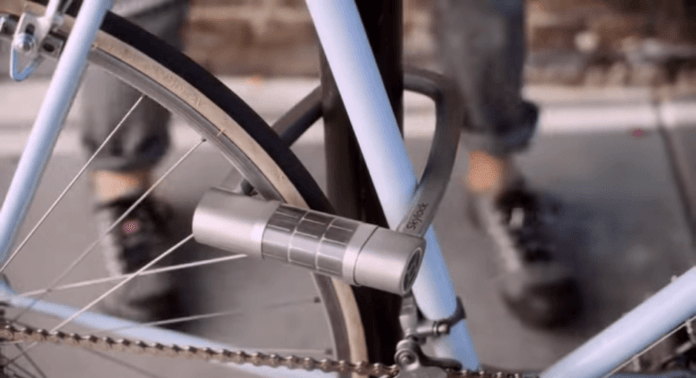 If you’re a bike owner, you know there’s nothing worse than the fear of having your primary mode of transportation stolen. Or worse yet, the fear of what would happen to you if you got in a major cycling accident and no one was around to help you.

A new product called Skylock looks to solve both of those problems with a bike lock and smartphone app.

Check out the video below:

Like most smartphones these days, the Skylock is built with an accelerometer in it, and if it is being jostled it sends an alert to the owner’s smartphone so they can check on the bike and make sure someone isn’t trying to steal it.

Even if it takes them a few minutes to get to it, the Skylock can withstand up to 7,000 lbs of force, making it very difficult to break. According to Skylock, the product has been developed to military standards and can withstand very tough breaking methods.

You also don’t have to worry about keeping a spare set of bike lock keys with you, as you only need your smartphone and app to unlock Skylock. You can even set it to automatically unlock when you’re approaching, which it senses via Bluetooth.

Similarly, if the owner gets in a cycling accident, the accelerometer triggers an alert that can be sent via the rider’s smartphone to family and friends.

Best of all, no charging is required, as the lock’s internal battery stays charged with clean energy using the solar panels on its front face.

Pre-order your Skylock now for $159 at skylock.cc