Using the Freedom of Information Act, a reporter with the environmental news publication Greenwire uncovered a 2007 report authored by then Environment Protection Agency scientists recommending the United States should take swift action to regulate greenhouse gases.

Known as an endangerment finding, it is reported to echo some of the same points found in the report ordered by President Obama last April.

Some sections of Obama’s endangerment report offer the same viewpoints on climate change as the suppressed Bush report word for word, including a statement that the U.S. and the rest of the world are experiencing the effects of climate change now. The Obama version, which is still in a period of public review is expected to become the canonical document because it contains a greater level of detail than the results contained in the Bush document. The 2009 endangerment finding is expected to give the EPA the authority to regulate greenhouse gasses by the end of the year. 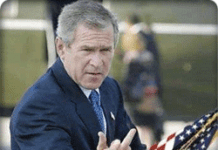 Why Trump’s EPA is far more vulnerable to attack than Reagan’s...