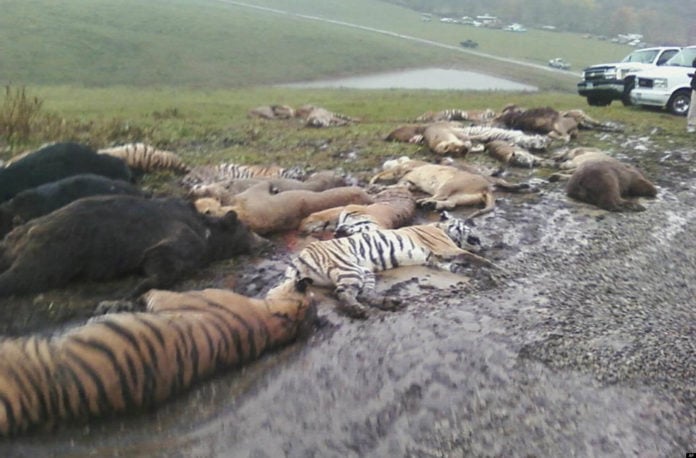 Federal legislation and several state-level bills are being considered to get a handle on the country’s out-of-control exotic pet ownership after an unstable owner unleashes more than 50 deadly wild animals to short-lived freedom and death in his town.

Ah, the U.S. Constitution – that infallible document written hundreds of years ago exclusively by rich white men guarantees that I have the right to “life, liberty and the pursuit of happiness.”

Did I go too far? Where does my right to happiness stop being protected by our laws? I suppose most people would say my happiness will be thwarted by law as soon as it infringes on another’s liberty.

Marian Thompson, widow of Terry Thompson who opened the cages of 56 exotic animals he was keeping on his farm – which included black bears, mountain lions and Bengal tigers – before he committed suicide, has now been awarded custody of the five animals who survived the massacre that ensued after Sheriff’s deputies hunted down 48 of the animals let loose on the roads of Zanesville, Ohio, in October of last year. 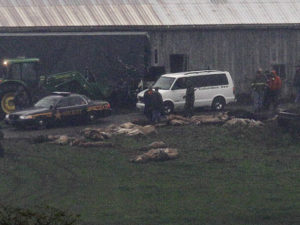 This decision was made just as the Ohio Senate passed the Dangerous Wild Animals Act which would move Ohio from a state allowing anyone to posses any animal with no permit or registration required, to banning private ownership of dangerous wild animals. Ohioans currently owning lions and tigers and bears would be allowed to keep their animals as long as they registered them with the Ohio Department of Agriculture by 2014.

While most animal rights organizations support the bill, they also criticize two gaping exemptions which will allow people to continue acquiring large constricting snakes, and will also allow anyone associated with the United States Zoological Association (USZA) to continue acquiring dangerous wild animals.

Constricting snakes, while not poisonous, can and have killed people. The country was shocked when the media reported the killing of a small child in his crib by the mother’s boyfriend’s constricting snake which had escaped from its enclosure during the night and suffocated the helpless child to death.

Another group promoting the exotic animal trade is the United States Zoological Association which exists solely to protect people’s right to acquire and keep wild animals as personal property. The best thing about this association is its peroxide-bleached-blonde president, Joe Schreibvogel, whose mullet puts MacGuyver to shame. In his anti-Dangerous Wild Animal Act press conference, blondie tells reporters that Terry Thompson was murdered and his animals released as part of a planned conspiracy to ban the private ownership of exotic animals in the state.

Also on Schreibvogel’s death list is the Big Cats and Public Safety Protection Act, federal legislation that would prohibit private possession of big cats except at places like highly qualified sanctuaries and zoos, and would require current owners to register their animals with the U.S. Dept. of Agriculture. Breeding would also be outlawed except by certain zoos and research institutions.

Seems reasonable enough. Since I live in California, one of only a handful of states that does not allow private citizens from holding wild animals captive, I don’t have to worry, but these bills represent true measures of safety for people living in states like Ohio where nobody really knows how many Bengal tigers live in angry captivity next door.

In the past 22 years, 21 people have been killed and 246 mauled by big cats kept as pets, according to Big Cat Rescue in Tampa, Fla. Escapes are common and often end in death for the fugitive animal.

Which brings us to the pesky animal rights issue. Who and what deserve to have which rights is an age-old question. For almost the entirety of civilization, it seemed perfectly reasonable that a person could own another person. At the time those rich white guys were writing about the right to “life, liberty and the pursuit of happiness,” 18 percent of Americans were enslaved.

The progression of a collective conscience brought us to abhor the thought of considering people as private property. While this mindset still applies in certain parts of the world where wives or children are regarded as a man’s property, the world as a whole understands keeping a person as property is wrong.

Animals, just like black people, women and children, feel pain, fear, happiness and suffer great mental, emotional and psychological distress when imprisoned and kept from acting out their most basic natural instincts.

I may really love and admire the beauty and wildness of a big cat. Maybe my life would be great if I could make a living off of keeping a few of these creatures in cages and charging people to come look at the poor beasts, only a shadow of their true wild selves. That may make me happy. But at what cost?

All of these people fighting to keep the trade in exotic pets are choosing their happiness over the happiness and liberty of other sentient beings. Just as the slave trade was hell on earth for the unfortunate Africans, the exotic pet trade is a dirty business exacerbating the destruction of wild habitat and the extinction of endangered animals in the wild.

Schreibvogel’s mulllet does not completely distract us from the abuse he is pedaling under the guise of personal property rights. Maybe he should promise to shave that thing to convince the public allowing unregulated accumulation of deadly animals is a basic human human right.

To email your elected official to support the federal ban