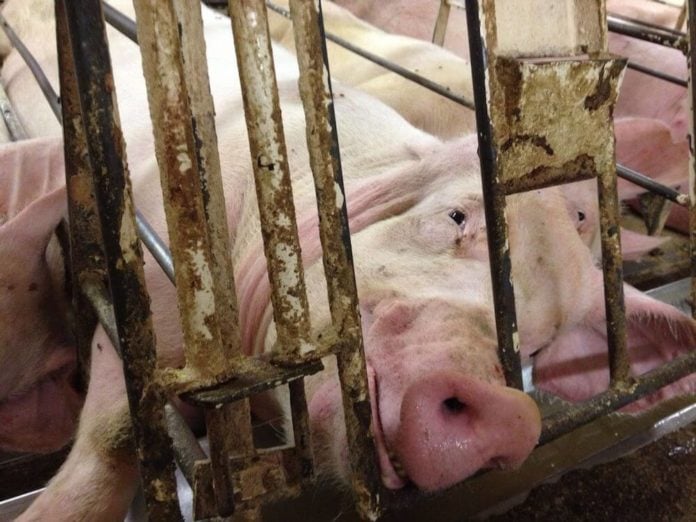 For the second time, New Jersey Gov. Chris Christie vetoed a bi-partisan bill supported by 93% of his constituents aimed at freeing pregnant pigs from being forced to spend their lives before slaughter confined to a metal cage so small they are unable to turn or lie down.

Critics are explaining this move as a clear indication that Gov. Christie is entertaining presidential aspirations.

What does a 2016 presidential bid have to do with allowing pigs doomed to slaughter a little leg room?

Apparently, it is so vital to the salvation of the world that Gov. Christie lead the United States of America that he is willing to publicly screw the will of the very people he swore to represent in order to gain the favor of Iowa Gov. Terry Branstad, the National Pork Producers (which is headquartered in Iowa) and the farmers of Iowa’s 20.5 million pigs.

Obviously, if Iowa’s pigs could vote, Gov. Christie would have heralded the bill as a step forward toward liberty and justice for all. But seeing as the 3.09 million human citizens of Iowa don’t look kindly on their methods of mass pig incarceration being criticized, Christie chose to err on the side of more torture on the off chance he could be elected president.

Christie explains away his veto by repeating almost verbatim spin from the National Pork Producers, as the Daily Beast pointed out.

“This bill is a solution in search of a problem,” Christie said to explain his veto.

The National Pork Producers’ Council wrote a letter calling the gestation crate ban “a solution in search of a problem.”

Gestation crates are metal cages that house pregnant pigs waiting to give birth. They are so small the pigs can neither turn around nor lie down comfortably. This lasts for about four months until the mother gives birth and she is moved to a farrowing crate with slightly more room so that she can nurse her babies through the metal bars. After her babies are weaned, they are taken from her, she is artificially inseminated and she goes through the entire process again until she is sent for slaughter.

Iowa Gov. Branstad called Christie’s veto a “good decision” saying “this is an issue that most people in New Jersey have no clue,” according to the Des Moines Register.

He went on to terrify Americans with the prospect of higher pork prices if we were to go through with this misguided attempt to treat the intelligent, social and sentient creatures we like to call bacon with any semblance of dignity before we kill them.

“They don’t raise hardly any pigs in New Jersey, they don’t have farrowing crates,” Branstad said. “But this is something we have knowledge of in Iowa, and I give him credit for listening to and understanding that this is something we’re very concerned about and that it does impact consumers as well because if these baby pigs are crushed and die that means there are fewer pigs and that impacts the price of pork.”

These guys don’t even care if they make sense anymore or not. As Humane Society representatives have pointed out, the bill vetoed by Christie in New Jersey applies only to gestation crates, and by definition this means there are no piglets to be crushed or stepped on by evil piggy mommies.

All the “family farms” in Iowa who are contracted (basically owned) by the huge corporations that demand the animals are housed in the most economically profitable manner are crying foul about our misunderstanding of the need for cramming pigs into lifelong torture cells.

One blog defended the use of these jails by answering the question “why do farmers use gestation stalls? Simply put, because pig farmers care about their animals.”

If gestation crates really were meant to protect pigs from themselves, from the fights and insanity that ensue when so many creatures are crammed together so tightly, then why not give the pigs a stall with enough room to at least turn around, to itch their back sides when they need it, to move at all?

In another post this blogger went on to describe how “I wish people could see the utter contentment sows experience when they are housed in gestation stalls.”

Apparently pig farmers wish people could be as delusional as they have to become to really believe that love means locking sentient beings up until their babies are stolen and they are sent to be killed by those claiming to care so much for their well being.

“I wish people understood this is why sows are housed in farrowing (birthing) stalls to prevent these heartaches,” another post lamented, referring to that glitch in evolution that allowed animals who are so clumsy as to consistently step on and kill their own babies to somehow perpetuate. “And yet, the animal rights agenda thinks farrowing stalls are cruel. They honestly haven’t seen cruel until they see deaths that could have been prevented.”

Related:   Feathers, fur and fins: The ugly side of the exotic pet trade

How about the death of the 20.5 million pigs in Iowa who are intentionally sent to slaughter these farmers care so much for? What heartache these people must suffer.

It all comes down to money in the end, and power for Gov. Christie. It seems the National Pork Council and their minions are simply taking care of the public in the same way they care for their pigs, by protecting us from ourselves and our own ignorance about what it takes to make a pig truly happy in life, and really profitable.