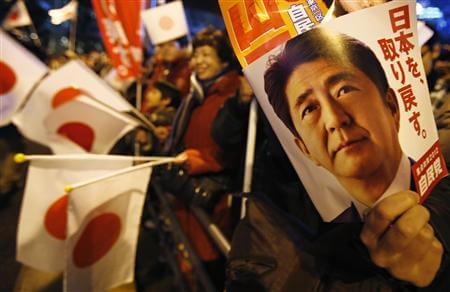 This past weekend, the Japanese headed to the polls to take part in the first election since the catastrophic nuclear disaster.

But the election results have anti-nuclear critics across the country shocked and baffled. Many of them are struggling to understand how the Liberal Democratic Party not only won, but won by a landslide.

The pro-nuclear party was victorious in Japan’s parliamentary election. The LDP snagged 294 of the 480 seats in the lower house. Meanwhile, the ruling Democratic Party was cut down to a fraction of its pre-election seat numbers. They dwindled to 57 seats, down from 230.

On March 11, 2011 a deadly tsunami slammed into Japan’s northeast coast. That tsunami triggered equipment failures at the Fukushima plant, leading to meltdowns and a radiation leak that forced thousands of nearby residents to evacuate.

Immediately after, the reaction from critics was fierce. Massive protests from anti-nuclear groups spread across Japan, calling for a ban on nuclear energy. Until the ruling Democrats were wiped from power, the party was working to phase out nuclear energy by the end of the 2030s.

But Japan’s sharp rejection of the ruling party has stunned many. Anti-nuclear proponents expected significant change from a population left reeling after meltdowns and explosions at the Fukushima Daiichi nuclear plant.

But according to the Associated Press (AP), anti-nuclear voters didn’t act as a cohesive group compared to the well-organized Liberal Democrats.

The news agency notes that the LDP is expected to revive the mass spending that bolstered decades of growth following World War II. The party will also reportedly push for inflation targets that will effectively curtail a rising yen.

Related:
Nuclear Energy - Is This Really the Answer to Fossil Fuels?

Meanwhile, another series of anti-nuclear protests is brewing across Japan as critics fear the LDP will restart the nation’s 48 nuclear reactors. They had been pulled offline following the 2011 disaster. Two had been reinstated in recent months.