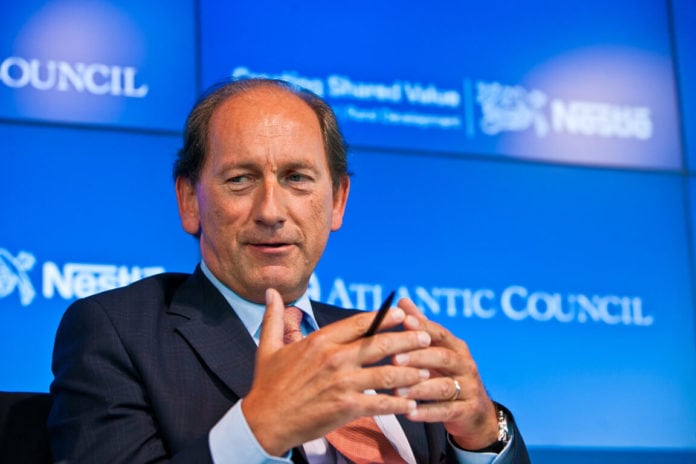 Nestlé, traditionally known for its candy bars and fudge syrup, is wading in to the controversial debate over biofuel targets.

The Guardian newspaper reports that the world’s largest food company has joined the UN and development groups, in its calls for the U.S. and EU to change their biofuel targets because of looming food shortages and price increases.

“We say no food for fuel,” said Paul Bulcke, chief executive of Nestlé, at the end of the World Water Week Conference in Sweden. “Agricultural food-based biofuel is an aberration. We say that the EU and US should put money behind the right biofuels.”

In the U.S., the Environmental Protection Agency (EPA) has a mandate whereby 40% of America’s corn harvest must be used to make biofuels. Many state governors have petitioned the EPA to waive the mandate, as the country faces its worst drought in over a century.

But Nestlé, which has 470 food factories around the world and 25% of the world’s bottled water market, says clean economy and U.S. energy independence should not be pursued at the expense of food supplies or massive price increases.

The Guardian recently spoke to Bulcke. His company has reportedly lobbied the U.S. and EU governments to change their quotas: “We have said [it] to [the] US government, but politically it’s hard. We are an important food company and, yes, we do have a voice. We try to be vocal with our convictions.”

The U.N.’s food agency has been ramping up the pressure on the United States and EU to change its biofuel policies because of the possibility of a world food crisis — much like the one we saw back in 2007 and 2008, which triggered food riots around the globe.

Nestlé says it has always tried to be environmentally-conscious in its business operations. The company notes it has been moving strongly to conserve water, both by helping farmers save waste by growing crops that need less, and by improving factory efficiency. Nestlé has also reportedly lowered its milk wastage dramatically, effectively saving its per-dollar water use, which has been reduced from 4.5 litres in 2002 to 1.5 litres today.