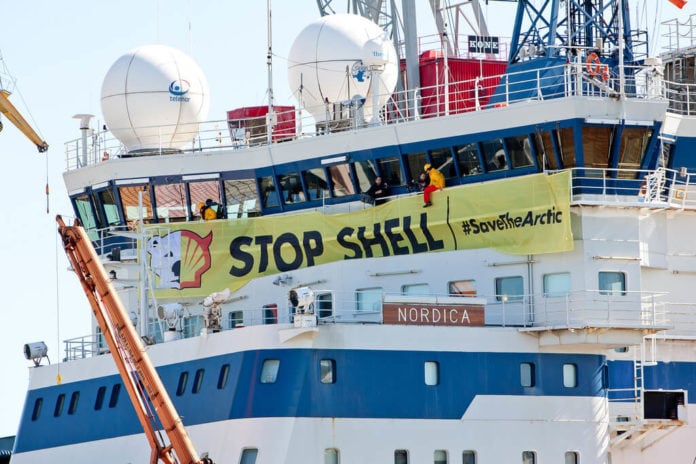 The U.S. government has announced that Royal Dutch Shell has been given a permit to begin preparation work at exploratory drilling sites in the Arctic. The work will be done while the company awaits certification for its oil spill response barge.

The announcement was made by U.S. Interior Secretary, Ken Salazar.

“We are allowing certain limited preparatory activities that we know can be done in a safe manner,” he said in a teleconference with reporters.

The company has been granted permission to starting digging with its drill ship in the Chukchi Sea off Alaska’s north-west coast. But it will only be able to drill into the layer of ocean bottom that’s above oil reserves. The Guardian reports that Shell can dig 20-by-40ft mud-line cellars, which will eventually hold and protect a well’s blowout preventer 40ft below the seabed. The company is also authorized to drill narrow pilot holes. These holes will reveal obstructions or gas pockets, down another 1,500ft.

“These activities are essential safety steps that will allow for the installation and protection of the blowout preventer,” Salazar said.

Salazar went on to tell reporters that the work will be conducted with safety experts from the Bureau of Safety and Environmental Enforcement. They will be on-hand 24 hours a day. He said the decision comes following exhaustive review of Shell drilling rigs and safety equipment, including a capping stack that could be lowered onto a leaking well.

The Guardian notes that Shell remains prohibited from drilling deeper into petroleum-bearing formations until it meets other requirements. These requirements include coast guard certification of an oil spill response barge that remains in port in Bellingham, Washington.

There are reports that federal regulators are requiring Shell to suspend drilling in the Chukchi 38 days before ice moves in. This is to make sure the company has time cope with an oil spill or a wellhead blowout. That means drilling would have to stop around September 24.

Earlier this month, Shell reportedly asked to extend that deadline for two weeks. The company says new data indicates ice will not be a factor until mid-November.

Salazar says shell hopes to drill exploratory wells in both the Chukchi and Beaufort seas during this year’s open water season, which is quickly coming to a close.

The Guardian reports that Shell Alaska vice president, Pete Slaiby, said employees cheered Salazar’s announcement. But he did acknowledge that completing a well in the Chukchi without the extension would be “very, very difficult”.

The spill response barge could be certified next week, but towing it to the drilling area would take up to two weeks.

The newspaper goes on to report that environmental groups condemned the decision. Margaret Williams of WWF said technology does not exist to contain a spill in the extreme Arctic Ocean environment.

“This is one of the most productive marine areas in the world, supporting hundreds of species and thousands of people who depend on the sea’s bounty,” she said. “To drill in our Arctic Ocean is to gamble with its future.”