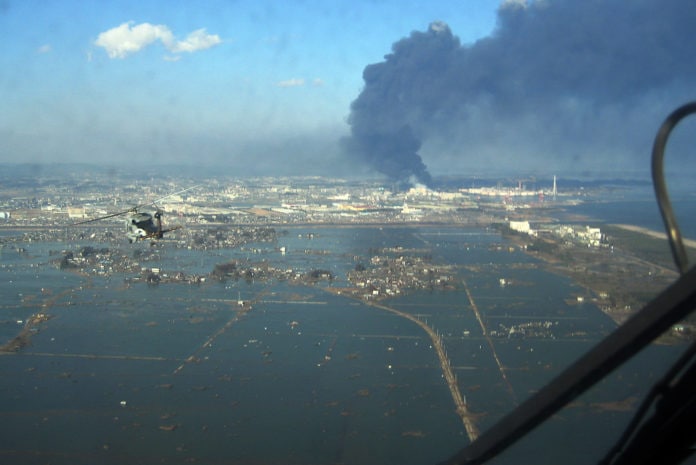 Tokyo Electric Power Co. (TEPCO) recently admitted that 300 tons (nearly 72,000 gallons) of contaminated water are leaking from Japan’s crippled Fukushima Daiichi plant into the Pacific Ocean. About 1000 tons of underground water from the nearby mountains flows into the plant compound daily. According to Japan’s Agency for Natural Resources and Energy, 400 tons seep into the broken reactor’s basement and get contaminated. From this contamination, 300 tons of irradiated water manages to leak into the Pacific Ocean. Of the remaining 600 tons of water that avoid the main basement, it is believed that large portions of this water are also being contaminated elsewhere before entering the sea.

In an effort to stop this massive leakage, Japanese Chief Cabinet Secretary, Yoshide Suga, announced that they would be building an ice wall that should stop the underground water from flowing into the ocean. The wall works by pumping below-freezing coolant through a series of pipes that are several meters below ground. The coolant freezes the surrounding soil, creating a frozen barrier that stops the mountain run-off from reaching the plant entirely.

Yoshide Suga stated that this project would cost 50 billion yen (or around $410 million). The ice wall would be less than a mile in length and would extend 65 feet beneath the surface. Frozen containment systems, especially of this size, are usually used to shore up mine shafts or foundations of structures while they are being constructed. Despite this novel use of ice wall technology, many experts are confident that it will be effective at stopping the water leakage.

Related:
Nuclear Power - Why Thorium Is Much Better Than Uranium

“If you want to create a barrier to water flow, this is an excellent technique to use,” said Ed Yarmak, president of Arctic Foundations. The Alaska-based company has designed and built frozen soil containment systems since the 1970s. “You’re… making the plant into an island. The groundwater coming down from the mountains will just go around it.”

Interestingly, even after its construction, it will take the cooling system upwards of two months to fully freeze the surrounding soil. This translates to almost 20,000 tons of contaminated water being leaked into the ocean. This additional leakage could mean millions of additional cleanup as the Japanese government attempts to prevent this contaminated groundwater from destroying the nearby environment.

Secondly, while ice walls have proven themselves to be reliable and safe, the system of pipes required to freeze the soil requires careful design and construction. Considering how prone Japan is to earthquakes, this system might only prove to be another impending disaster in the making.

Whatever Japan decides to do, let us hope that they do it soon. It might only be a matter of time before its Pacific Island neighbors start complaining about the damage they are inflicting by their nuclear run-off.